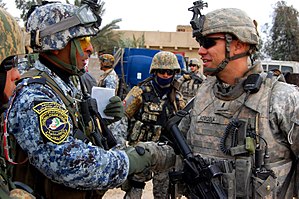 A U.S. Army officer from the 4th Infantry Division with an Iraqi policeman in January 2009.

Below is an estimated list of the major units deployed within the Multi-National Force - Iraq and other United States military units that were operating in Iraq under the U.S. Central Command (USCENTCOM) in 2009, during the Iraq War.

A U.S. Army soldier from the 172nd Infantry Brigade with Iraqi civilians in March 2009.

A U.S. Army soldier from the 25th Infantry Division with Iraqi children in March 2009.

A U.S. Army officer from the 1st Infantry Division with Iraqi soldiers in March 2009. 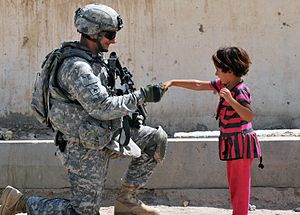 A U.S. Army soldier from the 82nd Airborne Division with an Iraqi child in August 2009. 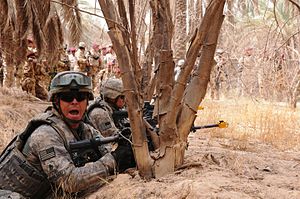 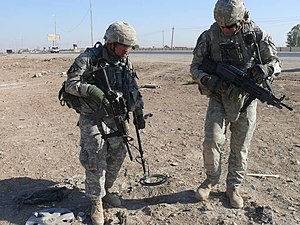 U.S. Army soldiers from the 1st Cavalry Division mine-sweeping near a Baghdad highway in October 2009.

There is a distinction in U.S. military terms between the troops of Multinational Force-Iraq and forces which fall directly under CENTCOM's control but are in Iraq also. There are two special operations task forces operating in Iraq, Task Force 77 and CJSOTF-AP. Though TF 77, a 'black' force, does not answer to MNF-Iraq, it is included here for the sake of completeness of the U.S. forces operating within Iraq. TF 77 was under the command of the Joint Special Operations Command and its principal mission was to hunt down the leaders of al-Qaeda in Iraq (AQI).[1]

Located approximately 40 miles north of Baghdad, Joint Base Balad was home to the headquarters of the U.S. Air Force's 332nd Air Expeditionary Wing and the U.S. Army's 3rd Sustainment Command (Expeditionary), which was responsible for providing logistics support to U.S. and British units throughout Iraq. It was formerly known as Logistics Support Area Anaconda, the largest army supply center in Iraq.

Unless otherwise noted, all units were U.S. in origin. This order of battle extends to battalion level and lists maneuver units only; artillery, support, special operations, and advisory units are not listed. Many brigade combat teams (BCTs) lent battalions to other BCTs during the course of their deployments, giving them "operational control" of those units. In such cases, the battalion's name is followed by "OPCON." Many higher-echelon units have two or more designations, often the formal unit around which the formation is based and then the name of the provisional task force; in these cases, both names are included, separated by a slash. Units were stationed at a variety of bases, including Forward Operating Bases (FOB), Contingency Operating Bases (COB) and Joint Security Stations (JSS).

The 34th Division transferred control of MND/USD-South to the 1st Infantry Division on February 2, 2010.

This division headquarters was provided by the 25th Infantry Division and was also known as Task Force Lightning. Its area of responsibility included the cities of Balad, Kirkuk, Tikrit, Mosul, and Samarra. It was based at Contingency Operating Base Speicher outside Tikrit, where one of its brigades was also stationed. It also had one brigade based in Mosul, one in Kirkuk, one at Taji, and one in Baqubah. 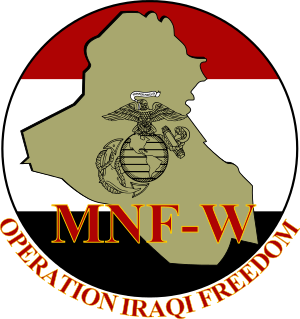 The seal of Multi-National Force West.

This formation headquarters was provided by the II Marine Expeditionary Force (Forward). It covered western Iraq, including Al Anbar Governorate and the cities of Ramadi and Fallujah, the area where Iraq's Sunni insurgency was at its strongest. Headquartered first at Camp Fallujah and then at Al Asad Airbase.

The U.S. Navy Riverine Squadrons of the U.S. Navy are elements of the Navy Expeditionary Combat Command (NECC) that have taken active part in the land operations in support of the army and Marine units. According to the Navy: "The Navy's Riverine force focuses on conducting Maritime Security Operations and Theater Security Cooperation in a riverine area of operations or other suitable area. The force is capable of combating enemy riverine forces by applying fires directly, or by coordinating supporting fires. It will share battle space with the other Services in an effort to close the seams in Doctrine, Tactics, Techniques, and Procedures, and Command, Control, Communications, Computers, Intelligence, Surveillance and Reconnaissance."[33]

As of 2008, three riverine squadrons were active in the U.S. Navy, all under the command of Riverine Group 1, located in Norfolk, Virginia. Riverine Squadron 1 (RIVRON 1) deployed to Iraq in April 2007 and was relieved by Riverine Squadron 2 (RIVRON 2) in October 2007.[34] Riverine Squadron 3 (RIVRON 3) was established in July 2007[35] and will presumably relieve RIVRON 2 in Iraq when their deployment is completed. Also deployed to Iraq, but in support of CJSOTF-AP and TF-77, is Combat Camera Group Pacific/Atlantic. This unit provides highly trained combat photographers who integrate with SEAL Teams and Special Forces Operational Detachment-Alpha (ODA) Teams in order to provide intelligence collection and combat documentation.

Other countries contributing to MNF-I[edit]

The UK was the second-largest contributor of foreign troops to Iraq, behind the United States. The UK's military commanded the former Multi-National Division (South-East) (Iraq), which included UK, Italian, Australian, Romanian, Danish, Portuguese, Czech, and Lithuanian troops. However, the UK turned over command to the United States on March 31, 2009, and were in the process of withdrawing the 4,100 UK personnel based in and around Basra, leaving behind just 400 by the end of July 2009.[38] The 20 Armoured Brigade commands the British forces in Iraq, which were then attached the U.S.-led Multi-National Division South.[39]

The Romanian Army had one battalion deployed to Iraq. The 26th Infantry Battalion, based at Contingency Operating Base Adder near Nasiriyah, was attached to the 4th BCT, 1st Cavalry Division and performed convoy and key infrastructure security missions.

The NATO Training Mission – Iraq was not a combat mission but is focused on training and mentoring Iraq Security Forces and the Iraqi National Police.[41] It is supported and funded by all 28 NATO nations and 14 nations have staff in theater as of January 2009, including Bulgaria, Denmark, Estonia, Hungary, Italy, Lithuania, Netherlands, Poland, Romania, Slovenia, Turkey, the United Kingdom, and the United States. Ukraine participates alongside these nations, though it is not a member of NATO.[42]