Iron Hill Brewery & Restaurant (Iron Hill) is a scratch brewery and craft restaurant founded in 1996 in Newark, Delaware. The company is recognized for their craft kitchen concept and award-winning beers. Iron Hill has claimed 47 medals over 21 consecutive years at the Great American Beer Festival, along with several World Beer Cup and restaurant awards.[1]

Iron Hill was founded in 1996 by Kevin Finn, Mark Edelson, and Kevin Davies. Soccer friends, Finn and Edelson, enjoyed home brewing in the early 1990s; their love of beer inspired the duo to create a business plan for a future brew pub.[2]

Finn and Edelson began raising money, researching the restaurant industry, and visiting location sites for a potential brew pub in the early 1990s. Eventually, the two invited Kevin Davies, a career restauranteur, as a third partner in their venture. Finn acquired money through family and an SBA loan to open the first Iron Hill Brewery & Restaurant on Main Street in Newark, Delaware.[2]

The team estimated that the Newark restaurant would produce $2 million in sales within the first year, however their success in the college centric town produced an extra million in revenue, which can be attributed to food sales.[2]

Finn discovered the geographic landmark, Iron Hill, in a Delaware book of maps, which explained the site's rich historical background. Finn, Edelson, and Davies chose the company's name after discovering that Iron Hill is considered the highest hill in Delaware and was the site of a significant battle during the Revolutionary War known as the Battle of Cooch's Bridge.[2]

The company's mark is a bird holding barley and hops, which represents two main ingredients found in beer.[2] 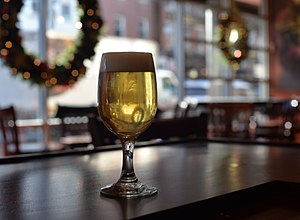 Iron Hill Brewery exclusively serves its own beers and offers new American cuisine. Each location brews a variety of beers that are influenced by the season. The brewery's goal is to focus on small batches of beer that are creative and in line with desirable styles and flavors.[2] Currently, hop forward session IPAs are trending in America, and according to Edelson, the brewery aims to offer beers in line with this and other trends.[3]

Each location carries 6 signature beers that consistently remain on tap:[4]