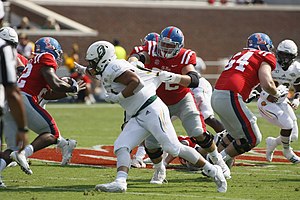 Isaac Adeyemi-Berglund is an American college football player for the Southeastern Louisiana Lions.

Adeyemi-Berglund grew up in Dartmouth, Nova Scotia, Canada and attended Dartmouth High School. At Dartmouth High school he played football, rugby, and basketball. Adeyemi_berglund spent time at linebacker and defensive end for the Spartans. He was named first team NSSAF All-Star for his performance at the linebacker position.[1] As a rugby player Adeyemi-Berglund lined up as a flank and helped the Spartans win 3 straight HRM championships. Finishing high school Adeyemi-Berglund went on to attend Champlain Regional College in Lennoxville, Quebec.

Adeyemi-Berglund recorded through 11 games played tackles (38), sacks (6), Tackles for loss (14), fumble recoveries (6), and fumble forced (1).[2] He helped lead the Cougars to an 11–0 record in 2015 and a Bol D’or championship. This team was voted to be the all decade team in CEGEP.[3] Through his efforts he was named as a first team all-star at the defensive end position by the RSEQ [4] as well as ranked as the number eight prospect in the nation by Canadian Football Chat. Adeyemi-Berglund garnered multiple preferred walk-on offers from schools like Texas Tech[5] and Penn State but eventually committed to Southeastern Louisiana University.[6]

Retrieved from "https://en.everybodywiki.com/index.php?title=Isaac_Adeyemi-Berglund&oldid=977634"
This page was last edited on 21 August 2020, at 14:59.
This page has been accessed 310 times.
Content is available under License CC BY-SA 3.0 unless otherwise noted.
Privacy policy
About EverybodyWiki Bios & Wiki
Disclaimers