James Harvey Shonkwiler (1877–1964) was a popular illustrator and editorial cartoonist for the Portsmouth Daily Times in the early 20th century. [1] Shonkwiler, who signed his work "Shonk," illustrated events in Portsmouth, Ohio, for the newspaper including public meetings, political events, sporting events, and festivals.

In 1918, Shonkwiler resigned from the Portsmouth Times and accepted a position with Standard Publishing Company of Cincinnati, Ohio, a religious publisher. There, he wrote and illustrated several children's books, including a series of ten books based on characters in the Bible.

Sketch of cartoon mascot for the Portsmouth Daily Times by J. Harvey Shonkwiler

A popular creation of Shonkwiler's was a cartoon goat mascot named Billy Butt-In. In his earlier appearances, Billy was drawn as a four-legged, unclothed goat, but in time the character became increasingly anthropomorphic. By the 1910s Billy was typically drawn upright with plaid trousers, a pipe (or cigar) and a fedora. Billy first appeared as a continuing minor character in Shonkwiler's daily cartoons around 1908. Soon the character became "The Times Weatherman," appearing in a daily one-panel, front page cartoon with a brief anecdote and a forecast of the weather for the next few days.

Later Billy Butt-In was featured in a popular, semi-regular comic strip with its own cast of characters. Among his adventures was a 1914 trip to meet Teddy Roosevelt in Rio de Janeiro, Brazil with his best friend, a stereotypical African-American named Shine. Billy had somehow come into possession of Roosevelt's "big stick," and wanted to return it to him.[2] 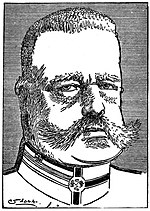 Shonkwiler was recognized for this 1915 cartoon featuring Paul von Hindenburg

Shonkwiler parodied a controversy regarding accusations against Commissioner of the Food and Drug Administration, Harvey Wiley, and his subsequent exoneration in a September 22, 1911 cartoon, which was forwarded to Wiley by a local doctor. In a December 10, 1911 letter, Wiley responded: "I think the very funniest cartoon and the most expressive one is that which you sent me from the Portsmouth Daily Times. All of my friends to whom I have shown it have laughed most heartily at the way the cartoonist has set up the situation."[6]

Shonkwiler was profiled in the August 1913 issue of Cartoons Magazine, which credited his editiorial cartoons with helping "to exterminate one of the old-time political rings that had for years maintained a strangle hold upon the city and county." (I.e., Portsmouth and Scioto County, Ohio.) Shonkwiler's creation, Billy Butt-In, was humorously profiled in Cartoons Magazine in May 1913, which described the mascot as a popular feature whose "private correspondence is second only to that of the editor himself."[7]

Cartoons Magazine recognized Shonkwiler for his portrayal of German General Paul von Hindenburg in June 1915. "A cartoon by J. H. Shonkwiler, of the Portsmouth (O.) Times, reproduced herewith, has won the artist many compliments, and is said to have reached Von Hindenburg himself." [8] "Shonkwiler won national acclaim during World War I for a cartoon...in which he drew the German general with hair of bayonets and used similar armaments for other facial features."[5]

Shonkwiler was struck and killed by a truck near is farm home near New Richmond, Ohio, on June 16, 1964. He was known to have failing hearing and eyesight, and apparently failed to notice the approaching vehicle. Shonkwiler was buried in Portsmouth, Ohio.[5]

Retrieved from "https://en.everybodywiki.com/index.php?title=J._Harvey_Shonkwiler&oldid=909129"
Categories:
Hidden categories:
This page was last edited on 31 July 2020, at 19:02.
This page has been accessed 366 times.
Content is available under License CC BY-SA 3.0 unless otherwise noted.
Privacy policy
About EverybodyWiki Bios & Wiki
Disclaimers