Jameir Desean Kirkpatrick (born January 16, 2000), known professionally as JameirKGolden (/jɑ,mɪr,keɪ,ˈgoʊldən/) is an American rapper, singer, and songwriter from Louisville, Kentucky.[1][2]He is best known for his singles including "Losing My Mind"[3], "Mix Match Socks"[4] , and "No Hard Feelings".[5]

Kirkpatrick was born and raised in Louisville. Kirkpatrick began writing songs his freshman year (Iroquois High School)[6] But would go on to record and release his first few single’s on a iPhone 5s in the summer of 2017.

Kirkpatrick attended Iroquois High School. graduating in 2018. During his Junior year, he became famous after his artist accounts would start racking up a few million streams across Apple music, Youtube and Spotify collectively.

In November 2017, Kirkpatrick released his debut single “Losing My Mind” featuring singer Shiloh Dynasty to his SoundCloud account, which started receiving internet attention[7]. It was officially released on Spotify for digital download in December 2017, where shortly after the single would start drawing the attention of major labels[8][9], but he chose not to pursue any of the deals offered to him at the time.

In June 2018, less than a month after graduating high school, he released his first Extended play, Death Will Follow Shortly, which was his first project released through a music distribution company called Distrokid. Early 2019, Kirkpatrick would then write his next viral single titled “Mix Match Socks”[10] that wouldn’t be released until June 28, 2019

Where the song would begin dominating on Spotify playlist gaining the attention of the popular Lo-fi Youtube page Ikigai that would post “Mix Match Socks” to Youtube gaining over tens of thousands views shortly after posting it. This single would launch Kirkpatrick in a new light amongst the public eye. By October, 2019. Kirkpatrick would gain the attention of Symphonic Distribution[11] due the rise of his new single “Mix Match Socks” where he would then sign a distribution deal for 3 years through his collective, and release from 1600 Forever After[12]. Shortly after Google invited Kirkpatrick to start using Google Cameos which is invite only to celebrities that allow them to communicate with fans by posting short video responses to popular questions asked about them on the internet. 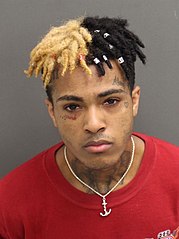 Kanye West (left) and XXXTentacion (right) were two of Kirkpatrick's biggest inspirations while growing up.

Kirkpatrick cited rapper Kanye West[13] and late rapper XXXTentacion[14] as his biggest influences, “Kanye West inspired me to take risk and be me, Florida rapper, XXXTentacion inspired me to be just raw with it like write it from the heart regardless of who’s judging because I’m a testament of my experiences so that contributes to the wide range of topics, I touch on in my music."

Retrieved from "https://en.everybodywiki.com/index.php?title=JameirKGolden&oldid=909956"
Categories:
Hidden categories:
This page was last edited on 1 August 2020, at 00:49.
This page has been accessed 285 times.
Content is available under License CC BY-SA 3.0 unless otherwise noted.
Privacy policy
About EverybodyWiki Bios & Wiki
Disclaimers
Mobile view