Janusz Cedro (born 12 July 1958 in Kielce) – Polish musician, composer, arranger, director, manager and musical producer. To a wider audience he is best known as a singer, manager and announcer of the Spirituals Singers Band and Janusz Cedro Live in Concert (later transformed into the Janusz Cedro and The Band). 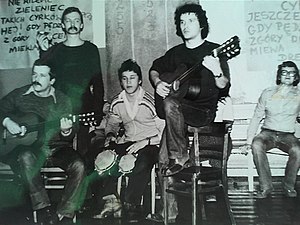 Spirituals Singers Band during one of the concerts

Janusz Cedro with a band during the "Gaude Fest" Festival

Cedro was born in Kielce He is a graduate of the 5th High School in Kielce.[citation needed] Since 1977 he has been associated with Wroclaw, where he studied at the Wroclaw Academy of Physical Education (Department of Tourism and Recreation).[1]

Cedro began his career in 1977, when he started performing with the Choir of the Technical University of Wroclaw called "Wroclaw Madrigalists".[2] In 1978 he went abroad for the first time, together with the choir. They took part in the International Festival of polyphonic music in Arezzo (Italy) where "Madrigalists", among 24 choirs from all over Europe, took the 4th place in the competition. Also with "Madrigalists", he took part in many festivals of choral music, recording sessions for Polish Radio and, together with the Choir, he gave many concerts in Poland.

In 1977, at the Academy of Physical Education in Wroclaw, he formed a music group performing sung poetry, called "Ponad Nami", where he was the composer of all the songs. Witold Palusiński was a songwriter for the band. He studied Physical Education in Wroclaw, just as the rest of the band: Cedro (guitar, vocals), Jerzy Mucha (guitar and vocals), Krzysztof Skorupski (percussion, vocals), Tadeusz Hołowiński (percussion and vocals) and Marek Borkowski (bass).

In 1978 from the initiative of Włodzimierz Szomański,[3] and supported by the Rector of Wroclaw University of Physical Education, professor Julian Jonkisz, the Spirituals Singers Band was established at the University, to perform American spiritual and gospel music at the highest level. Over time, the band's repertoire was expanded to include jazz standards and Polish carols in jazz arrangements.[1]

Cedro was also a part of the first lineup of 12, as a singer, frontman and manager. He translated all the lyrics of the gospel standards and taught the band members the correct intonation, when performing the repertoire chosen by the group (negro spirituals music). Between 1978 and 1994 Cedro led the band as a manager and was a singer, compere and translator. While abroad he also announced each song in English. Together with the band he played about 2,500 concerts in Poland and Western Europe.[1]

Spirituals Singers Band made its debut in November 1978 at the Festival of Poetry and Poetic Songs in Wroclaw. The band participated in all the major jazz festivals in the country, including the Student Jazz Festival "Jazz at the Oder" in Wroclaw between 1979 and 1993, the Student "Fama" Festival in Swinoujscie (1982), Traditional Jazz Competition "Złota Tarka" in Warsaw in 1980, 1981 (winning the J. Balcerak prize), 1982 (winning the Department of Culture of capital city of Warsaw prize), 1983 (honorable mention) and in 1984, International Meeting of Jazz Vocalists in Zamosc in 1983–1984 and the International Jazz Festival "Jazz Jamboree" in Warsaw in 1988. Spirituals Singers Band have also appeared at the Festival of Academic Choirs in Wroclaw and Warsaw in 1983, Negro Spirituals Festival in Czestochowa and Wratislavia Cantans in 1986 and 1991, Christian Artists Festival in Katowice in 1990–1991 and the "Sopot Festival" at the Forest Opera in 1990.

The band has toured in Germany, Italy, the former USSR (Lithuania), Czechoslovakia, the Netherlands, Lithuania or France. Since 1989, Spirituals Singers Band was cooperating with the Palast Promotion concert agency from Wiesbaden (Germany), which resulted in about 200 concerts played in Germany between 1989 and 1994. It also allowed the band to record a live album "Fare You Well" in 1989, containing the recording of the concert in Wiesbaden. Spirituals Singers Band was awarded Polish Artistic Agency "Pagart's" Waclaw Kisielewski award for the best foreign debut in 1990.

Between 1992 and 1993 the band played as a support for the American gospel band, BeBe & CeCe Winans, taking part in their concert tour. Concerts of that tour included performances at the Congress Hall in Warsaw and Teatr Polski in Wroclaw. The band received the First Award by "Jazz Forum" magazine in 1992 in the "best jazz group in Poland" category.

For Cedro work with "Spirituals," as they were commonly referred to, has also resulted in numerous appearances on Polish television channels, such as TVP1, TVP2 and TVP3 Wroclaw.[2]

In 1994, the band became a vocal ensemble, and Cedro left the band to start his solo career.[1]

In the years 1994–2000 he continued his artistic career creating two music projects. The first of those was "Janusz Cedro – Live in Concert", which was a duet with Wroclaw jazz pianist Marek Markowski.[2] The duo has given many concerts in Poland in clubs and at festivals, e.g. at Traditional Jazz Festival "Golden Washboard" in Iława in 1997 or the Festival of Gospel Music "Camp Meeting" in Osiek (in 1997 and 1998). They have also produced two television programs: "Janusz Cedro Live in Concert" for TVP Wrocław, and "Carols, carols" for TV Katowice.

The second of the projects was the "Janusz Cedro and THE BAND", where Cedro was accompanied by the following quartet: Marek Markowski (piano), Tomasz Grabowy (bass), Darek Kaliszuk (drums) and Adam Went (saxophone).[2] The band took part in many festivals, e.g. the Festival of Gospel Music "Camp Meeting" in Osiek in 1998, the Festival "Gaude Fest" (in 1997 at Spodek, Katowice and in 1998 in the amphitheater in Wisla).

Cedro has also performed [Spiritual (music)|negro spirituals and gospel] music in the United States, including a concert in 1995 with pianist Susan Grey at the jazz festival "Jazz in the Park" in Charlotte (USA).[2]

In November 2000, he played a farewell concert as a vocalist with "Janusz Cedro and The Band" in the Wroclaw Jazz Club "Rura".

Since 2000, Cedro works in the music industry as a producer. He established the first Jazz festival. For the special events he works as producer, host and director. In the years 2000–2013 he produced over 400 different events in Poland and abroad.[1] Some of those events are listed below:

He was also an organizer and co-organizer of various events, such as:

XII Great Viennese Ball. Cedro was director, producer and a host since 2002 to 2014.

He was married in 1995 to Dorota Cedro. They have four children: Dominik, Marceli, Maksymilian and Adam.[citation needed]