Entrance of the school

Jawaharlal Nehru Vidyapith is a West Bengal Government-aided Primary School for boys. It is under Department of Education West Bengal[1][2]

The school is named in honour of Pandit Jawaharlal Nehru, the first Prime Minister of India, and was established in 1964.[6] 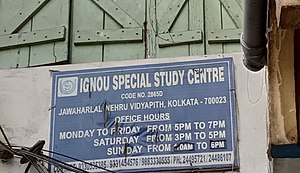 The school is a Study Centre for Indira Gandhi National Open University, a Central University in India. [7][8][9]

Retrieved from "https://en.everybodywiki.com/index.php?title=Jawaharlal_Nehru_Vidyapith&oldid=1119780"
Category:
This page was last edited on 14 November 2020, at 09:26.
This page has been accessed 199 times.
Content is available under License CC BY-SA 3.0 unless otherwise noted.
Privacy policy
About EverybodyWiki Bios & Wiki
Disclaimers
Mobile view