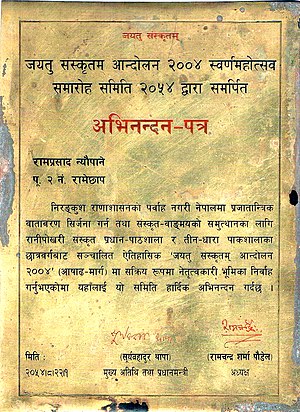 One of the leaders of the Jayatu Sanskitam student movement, Pandit Ram Prasad Neupane received felicitation for his work towards bringing democracy in Nepal.

The Jayatu Sanskritam movement was begun in 1947 by students of the Tin Dhara Pakshala Sanskrit School in Nepal. They demanded democracy, basic welfare, and the inclusion of modern subjects in their curriculum.[1] It was the first student uprising in Nepal's history,[2] and led to the Revolution of 1951 and the fall of the Rana dynasty.[3]

The students of the Tin Dhara Pakshala hostel initiated protests against the Rana dynasty in Nepal. There were also students at a school called Rajkiya Sanskrit Vidyalaya that was near the Ranipokhari. The only subject allowed in the Sanskrit schools was the study of Sanskrit, which contrasted with the wider educational opportunities and higher status of students related to the ruling Rana clan.[3]

The protestors became known for the slogan they would call, jayatu Sanskritam ("victory to the cause of Sanskrit").[4]

On 1 June 1947, the students submitted a written demand to Prime Minister Padma Shumsher requesting courses in geography, history, economics and political science. When the government ignored their demands, the students went on strike.[5] The students continued to agitate for educational and social equality, including waving anti-Rana flags in protest.[6] The strike lasted until 15 June, when the government agreed to expand the curriculum offered to the students. Although the protests were placated by the promises from Prime Minister Padma Shumsher Jang Bahadur Rana, his military commander-in-chief Mohan Shumsher Jang Bahadur Rana ordered arrests and imprisonments, and forcefully deported forty-two students that were identified as leaders of the movement.[3][7] From India, many of these exiles joined Bishweshwar Prasad Koirala and others agitating for the establishment of democracy in Nepal, which led to the 1951 revolution and the overthrow of the regime.[8]

Ram Prasad Neupane was born in the Ramechhap District of Nepal. He studied Sanskrit in Sanskrit Pradhan, Paathsaala, Ranipokhari and stayed at the Tin Dhara Paakshala hostel in Durbar Marg, Kathmandu, Nepal. He was exiled with other leaders for protesting against the Rana regime.[5]

Retrieved from "https://en.everybodywiki.com/index.php?title=Jayatu_Sanskritam_movement&oldid=911338"
Categories:
Hidden category:
This page was last edited on 1 August 2020, at 10:56.
This page has been accessed 221 times.
Content is available under License CC BY-SA 3.0 unless otherwise noted.
Privacy policy
About EverybodyWiki Bios & Wiki
Disclaimers