Jhulelal Mandir is a temple situated in Nadiad, in the Indian state of Gujarat. Lord Jhulelal is also known as Varun Deva, who is king of water.

Jhulelal's abode is the ocean and Sindhu River. His weapon is a sword. He rides a fish and a horse.

This temple was build in 1968, a incident happened that time then the temple was built. Once a person saw that water was coming out from that place but there was no source of water created it was natural, as Lord Jhulelal is god of water people beleived that it was Lord Jhulelal's ashirwad to them and they should build a temple there so, that every people gets benefit or ashirwad of god. 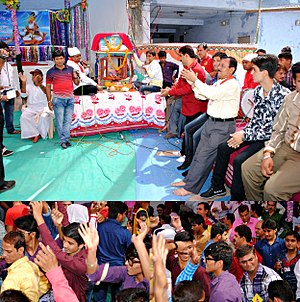 Nadiad's Jhulelal Temple is also famous for its Behrana Saheb many people call them to do behrana saheb from cities like jaipur, Vijayvada, Nasik, Vadodara, Ahmedabad, etc.It is very popular people enjoy it very much.

We also sung beautifull songs of God in Sindhi

Other sources to know the temple[edit]

Nowadays people are more on online so, Jhulelal mandir also supports online and we have made a page on facebook, Instagram so, that people are more engaged with relegious and with temple.

3. Google Maps :- You can search Jhulelal Mandir Nadiad On Google Maps alos and you will get proper location were temple is.

Retrieved from "https://en.everybodywiki.com/index.php?title=Jhulelal_Mandir_Nadiad&oldid=912369"
Categories:
Hidden categories:
This page was last edited on 1 August 2020, at 18:42.
This page has been accessed 288 times.
Content is available under License CC BY-SA 3.0 unless otherwise noted.
Privacy policy
About EverybodyWiki Bios & Wiki
Disclaimers