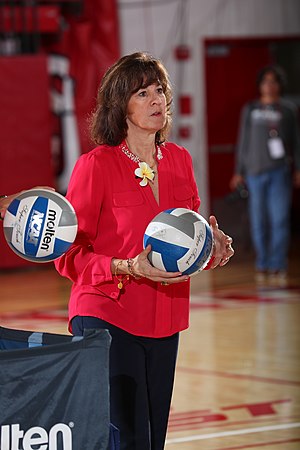 Joanne Persico is the NCAA Div. 1 women's volleyball head coach at St. John's University. She has led St. John's to five Big East Conference Championships and three NCAA Tournament appearances.[1] Persico founded and developed the first-ever St. John's volleyball program in 1994. After leading the Red Storm to a 23-12 record in 2018, Persico was named the Big East Coach of the Year. In 2019, Persico helped St. John's capture the Big East Tournament Championship after entering the tournament as the fourth overall seed. The Red Storm swept then-No. 10 Creighton in the opening round before defeating then-No. 12 Marquette to become the first fourth seed to win the title since the conference's reconfiguration in 2013.[2] Persico has one appearance in the NCAA Tournament Round of 32 in 2006 and took the Johnnies to the Sweet Sixteen during the following 2007 season. Persico has amassed over 500 career victories and is the founder of the inaugural St. John's volleyball camp.[3]