John Raymond Evelyn Stansfeld DSO (20 April 1880 – 28 September 1915) was a British army officer involved in the Relief of Ladysmith and the Battle of Spion Kop during the Boer War and the First Battle of Ypres and Battle of Loos during World War I.

Stansfeld was born on 20 April 1880. He was the youngest child and only son of John Birkbeck Evelyn Stansfeld (1846–1911), Rector of Preston, and his wife Marie Agnes Barrenger. John Snr was the son of Rev. John Stansfield (1814–61), Vicar of Coniston Cold. His cousin, was John Stansfeld (1840–1928) of Field House, Sowerby, and Dunninald Castle, Montrose. He was a descendant of the Stansfeld family of Stansfield and Sowerby, Yorkshire, and a distant cousin of William Crompton-Stansfield, Sir James Stansfeld, James Rawdon Stansfeld and Thomas Wolryche Stansfeld.[1] 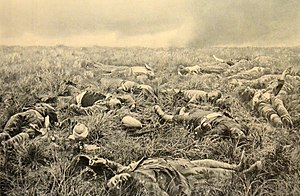 The aftermath of the Battle of Spion Kop.

Stansfeld was educated at Uppingham School and the Royal Military Academy Sandhurst before enlisting in the army and was appointed as 2nd Lieutenant in the 2nd Battalion, Gordon Highlanders in 1899. He served in the Boer War in South Africa (1899–1902), and was present at the Relief of Ladysmith, Colneso, Tugela Heights, and the Battle of Spion Kop. At Spion Kop, he helped wounded soldiers while under fire, for which he was appointed a Companion of the Distinguished Service Order (DSO) in 1900. He was also twice mentioned in despatches (1901).[2] 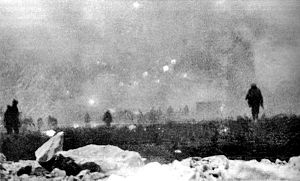 Stansfeld later served in India and Egypt (1910–14), at Sialkot, Peshawar, Calcutta and Cawnpore, and participated in the Delhi Durbar (1911), before returning to Europe in 1914. He returned from Egypt and was wounded during the First Battle of Ypres. He returned to the front after three weeks' leave, and was again mentioned in dispatches. He was promoted to Major and, in March 1915, was wounded by a shrapnel bullet in the shoulder at Neuve Chapelle.[2][3]

Stansfeld died, on 28 September 1915, from wounds received whilst leading his regiment into action at the Battle of Loos three days earlier.[4][5][6] He is buried at the Chocques Military Cemetery.[7]

Retrieved from "https://en.everybodywiki.com/index.php?title=John_Raymond_Evelyn_Stansfeld&oldid=1819867"
Categories:
Hidden categories:
This page was last edited on 19 July 2021, at 17:27.
This page has been accessed 48 times.
Content is available under License CC BY-SA 3.0 unless otherwise noted.
Privacy policy
About EverybodyWiki Bios & Wiki
Disclaimers