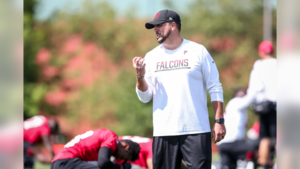 Justin Outten is currently the Tight Ends coach at the Green Bay Packers. He accepted the position January 24, 2019.

Outten worked with the Atlanta Falcons an Offensive Assistant working with the Offensive Line Coach in 2018. Outten helped coach an offensive line that assisted the Falcon's offense average 389.1 yards per game, the sixth-most in the league, and their blocking helped Ryan who threw for 4,294 yards and 35 touchdowns. Morgan also oversaw C Alex Mack, who was selected to his sixth Pro Bowl, and T Jake Matthews, who was selected to his first Pro Bowl.

Outten was an Offensive Assistant in 2017 working specifically with the Offensive line. He helped coach an offensive line that only allowed 24 sacks, which was tied for the third lowest amount in the NFL. The offensive line was also a catalyst for the eighth best offense in the league. The Falcons offense averaged 364.8 yards per game and blocked for QB Matt Ryan who averaged 249.4 passing yards per game, which was also the eighth highest in the league. Their blocking also helped the 10-year veteran reach his seventh straight 4,000 passing yard season.

Outten came into the NFL as an Offensive Intern for the 2016 season working with the Offensive Line that blocked for the NFL MVP, Matt Ryan. During that year the Falcons became the NFC Champions and went on to the Super Bowl falling short in the end. The offensive line was a major reason why the team averaged a league-high and franchise high 33.8 points per game. The Falcons broke the franchise record for most points scored in a season in Week 15, with the help of the offensive, when they scored 540 total points on the season, which tied them with the 2000 St. Louis Rams for the eighth most points scored in a season.

Also in 2016, the offensive line also assisted Ryan who threw for a career and franchise high 4,944 yards and 38 touchdowns. Ryan also had a career high 117.1 passer rating, which was the fifth best all-time passer rating. Outten helped coach Mack who was selected to his fourth Pro Bowl that year. In the run game the offensive line also helped pave the way for a rushing attack that racked up 1,928 yards on the season, which was fifth in the league in 2016. Under his guidance, the offensive line blocked for Devonta Freeman, who finished in the top 10 in rushing for the second year in a row, and made it to his second consecutive Pro Bowl.

Outten was the Assistant Head Coach/Offensive Coordinator/Offensive Line coach at Spring Westfield High School in Houston TX holding a record of 57-9 from 2008-2015. He helped 24 Offensive Linemen and Tight Ends receive Scholarships to various schools including LSU, TCU, Uuniversity of Houston, and Indiana. Outten coached One Under Armour All-American Toby Weathersby, who was the first High School player to receive the Rotary Lombardi Trophy (2014).

Outten was an Offensive Graduate Assistant at Syracuse University in 2007 after completing his final year of playing.

Justin Outten was a 3 year letter winner who started 23 games at the center position while being a Captain at Syracuse University. In 2003 he saw action in 5 games and helped Syracuse win the Big East Championship. Outten was the recipient of the Ray Martino Award for loyalty, enthusiasm, and perseverance.

Played under the highly successful Mike Pettine Sr. at Central Bucks West High School. No. 8-rated center in the country by Rivals.com … Received PrepStar Honorable Mention All-East Region recognition … Rated the No. 31 prospect from Pennsylvania by SuperPrep … Received All-Southeast Pennsylvania, All-Intelligencer, All-Inquirer (Philadelphia) and all-county recognition as senior … Named all-area and all-league as a senior and junior … Third-team all-state as a junior … Team captain and most valuable linemen as a senior … A three-year letterwinner on a team that won the state championship in his sophomore year.

Retrieved from "https://en.everybodywiki.com/index.php?title=Justin_Outten&oldid=915369"
This page was last edited on 2 August 2020, at 19:09.
This page has been accessed 332 times.
Content is available under License CC BY-SA 3.0 unless otherwise noted.
Privacy policy
About EverybodyWiki Bios & Wiki
Disclaimers
Mobile view