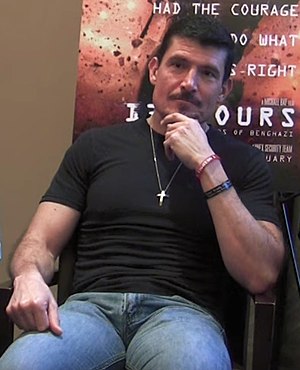 Kris Paronto interviewed about 13 Hours: The Secret Soldiers of Benghazi, in 2016.

Kris "Tanto" Paronto (born circa 1971) is an American author and speaker. He is also former U.S. Army Ranger and previously worked as CIA security contractor.[1] Paronto is known for his actions while part of the CIA annex security team during the 2012 terrorist attack on the U.S. Ambassador to Libya Chris Stephens and the CIA compound in Benghazi. Paronto co-authored 13 Hours: The Inside Account of What Really Happened in Benghazi, a novel covering the events of the attack. Michael Bay later adapted the novel into to a film starring Pablo Schreiber as Paronto. He is author of the 2017 self-improvement novel The Ranger Way: Living the Code On and Off the Battlefield.

Paronto was born in Alamosa, Colorado. His parents were educators and his mother taught his first-grade class. His father was a football coach and athletic director. Paronto played football, baseball and basketball. A football scholarship helped pay for his college degrees which include an associates, bachelor and master degrees.[2]

Paronto served four years as an Army Ranger[3] followed by four years in the National Guard. He reached the enlisted rank of Sergeant before receiving a commission in 2003.[2]

Paronto was a CIA private security contractor guarding the Benghazi, Libya CIA annex, during the 2012 Benghazi attack.[4][5] CIA contractors Tyrone S. Woods and Glen Doherty were killed in the attack along with the U.S. Ambassador to Libya J. Christopher Stevens and U.S. Foreign Service Information Management Officer Sean Smith. After Benghazi, Paronto served as a security contractor in Yemen before leaving the CIA.[6]

Following his exit from the CIA, Paronto became an author and public speaker. After the U.S. captured Ahmed Abu Khatallah for his role in the Benghazi attack and brought him to the U.S., Paronto was critical of the decision made by the Obama Administration to have him tried before a jury in Federal court. In protest of that decision, Paronto refused to testify at his trial.[7] Along with Mitchell Zuckoff and other members of the Annex Security Team stationed in Benghazi, Paronto co-wrote the book 13 Hours,[8][9] which became a New York Times bestseller. The book was the basis for the Michael Bay-directed film 13 Hours: The Secret Soldiers of Benghazi.[10] Paronto also wrote the best-selling[11] self-help reference The Ranger Way: Living the Code On and Off the Battlefield. In 2017, Paronto released his second book, The Ranger Way: Living the Code On and Off the Battlefield. A self-improvement and survival guide, the book takes Paronto's experiences from his Army training to instruct readers on how to be successful in their own lives through overcoming adversity.[12]

Template:Attack on the U.S. diplomatic mission in Benghazi