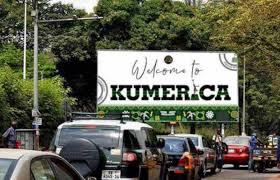 Kumerica [noun] is an internet slang (sensational social media word) for the city of Greater Kumasi in Asanti Region of Ghana. The word Kumerica was coined from a blend (portmanteau) of Kumasi and America (Ku + merica) by the young people of Kumasi (Oseikrom or The Garden City of West Africa) who live their lifestyle full of luxuries, bling-blings and display of jewels, gold chains ( or ostentatious jewellery), drive in expensive cars, royalty and riches like the Black Americans. Originally, the main purpose of these young Kumasi guys was to showcase their riches and luxurious lifestyle, to tell the world that they live in Kumasi but their lifestyles are like the black Americans; and this includes how they speak American English (especially American slangs, tonations and accent), how they dress, and wear luxury clothes, shoes and use cars. So the term (Kumerica or Kumerican, whether the City [Kumasi] or a person in/born in Kumasi) is basically means living a bling lifestyle like the Black Americans (African-Americans).

Kumerican [noun] is anyone born in the city of Greater Kumasi (Kumerica) and/or lives in Kumasi (Kumerica) and has a lifestyle full of luxuries, bling-bling and display of ostentatious jewellery, gold chains, nice cars, royalty and riches like the Black Americans. The word Kumerican was also coined from a blend of Kumasi and American (Ku + merican). This means if you’re born in Kumerica you are called Kumerican or if you live in Kumerica you are called Kumerican. As at the time of writing this piece of article, the word Kumerica or Kumerican is the most trending used word in Ghana, and globally recognized by the Ghanaian diaspora. As of now, many people (almost all the Asantes or Kumasi Residents) have embraced the concept of Kumerica and the meaning of "Kumerican" has also metamorphosed to mean someone who lives in and/or born in Kumasi (Kumerica), and it doesn’t matter whether the person dresses and behaves like a Black American or lives in luxurious lifestyle with bling-bling.

The up-coming artistes and musicians in Kumasi have popularized the words (Kumerica and Kumerican) in their songs and music to reflect their identity as Kumericans and Asantes at large. Apart from the fact that the term Kumerica is used to mean the city of Kumasi, it is now also associated with the hiphop kind of music in Kumasi. It seems to have created another genre of Ghanaian hiphop (hiplife) which is typically associated with the Asantes, and Kumasi in particular. And this kind of lifestyle and rap and behaviours and swag (confidence, self-important or self-esteem and pride) show their identity as people from a royal kingdom (the Asante Kingdom or Asante Region). One of the most popular Kumerican hiphop that is/was a classic and superb is the Akatafoɔ by Kawabanga-(feat.O’Kenneth, Reggie & Jay Bahd). This music, the Akatafoɔ popularized Kumericans and Kumerica on the social media from the mid 2020. You can watch the Official Video of AKATAFOƆ on Youtube.

Asakaa is a typical street language developed by the people of Kumerica. It is a lanaguage of a blend of Twi, English, Fanti, Hausa, etc. One of the main of reasons why the people of Kumasi developed Asakaa for trading. They use Asakaa basically for trading at the main central business areas like Adum, kejetia, Racehorse, Bantama, etc. When selling and buying things at Kejetia or Adum, the sellers/traders would use Asakaa to communicate/talk to themselve so that person (buyer) buying from them traders (sellers) will not understand what they (sellers/traders) are talking. This street language in Kumasi use by the Kumericmainly started by the young people who were mainly men who hussle to day and night to buy and sell at the most busiest and biggest opened market in West Africa, Kejetia. Kumerican have now created a muical genre from Asakaa. So as we the Kumerican movement has Asakaa Genre or Asakaa Drill Music. Within the Kumerican, there is a group called Asakaa group who created and brought the type of music called Asakaa Music. They also have Asakaa dance.

Asakaa music is full of terms, words whether Twi or English which are used by the Kumericans, and understood by the Kumericans. In Asakaa music or Asakaa language, the word, "brother" is spelt as or pronounced as "Dabro". The language is like a reversed of words, phrases, sentences and stuff. When the young guys do not want strangers/visitiors who are non-Kumasi or non-Kumericans to understand what they (Kumasi guys) are saying (or talking about) they speak in Asakaa language. When non-Kumasi people come to Kumasi for the first time whether to trade or buy from them at Adum and Kejetia, the Kumericans (the people of Kumasi) will use/speak in Asakaa to confuse the strangers (visitors or the buyers), not to let them (the non-Kumericans) to understand what they (Kumericans) are speaking about.

The Kumericans now claim that Kumerica (Kumasi) is no more a city (or not only a city) but also a country within a country. They believe that Kumerica is a country with its towns and suburbs now turning into states therefore making Kumerica a country. Again, Kumeicans believe their Region, the Asanti Region, is now called the United States of Asantes, (USA) therefore making Asanti Region also a country within the country Ghana. So Kumerica is a country within the country the United States of Asantes (USA) and also the country Ghana. To the non-Kumericans they think these Kumasi guys (Kumericans) are funny people that's why they are giving themselves funny and catching names and terms which are associated with America. At first, we all thought it was a joke, these Kumricans are cracking jokes on the social media but this funny game has turned into sensational movement and creating job opportunities for the youth in Kumasi. This Kumerica or Kumerican sensation has creaed economic avenue for some people in the Asante Kingdom, as people are making and designing clothes, shoes, face-masks, rings, earrings, and necklace with the words "Kumerican" or "Kumerica". There is curently high demand for cloths, shirts, shorts, shoes and face-masks (paraphernalia) with inscriptions like "Proud to be Kumerican", "I'm Kumerican", "Proud Kumerican". These clothes especially the T-Shit and rings with "Kumerica" or "Kumerican" logo is sold for GH50 Cedis or GH100 Cedis. Young guys in the city of Greater Kumerica are also taking advantage of the Kumerican fever (or wave) to make songs and music for sales especially on the internet. Professional musicians, rapper, song writers, social media bloggers, radio and TV stations are all trying to get monies out of this Kumerica and Kumerican phenomenon by creating contents and programmes that relate to, reflect or contain the concept of Kumerican or Kumerica. YPee is one of the great artistes in Kumerica who has musicalized the towns in Kumerica to correspond to the cities and states in America. eg: Bantama, a popular and most densely town in Kumasi, is called Florida, Kejetia is now called New York, Adum is now called Manhattan in Kumerica. A social media Celebrity and UK-based Ghanaian, popularly known as Zoro-King is one of the Godfathers of Kumericans. OTUMFOU Osei Tutu II, the Asantehene, is the King of The United States of Asantes (The Asante Kingdom/Asante Region), and he lives at Manhyia Palace, the Washington DC of Kumerica. Nana Akwasi Boakye Yiadom (Naby) is a Kumerican from Kumerica but currently lives in the UK.

This name "Kumerica" is not officially accepted by the Ghana Government to replace the official name Kumasi in all Ghana Government Documents. These young Kumericans believe that one day their dream of making Kumerica and Kumerican officially accepted by the government and the King of the Asante Kingdom (Asantehene) would come true. These guys have planned to meet the King to talk about or petition him about the possibilities of making Kumerican and Kumerica official for the people and the city of Kumasi and Asanti Region at large. There are many funny revelations about this Kumerican phenomenon as the people of Kumerica in a humour way trying to suggest they have developed their National Coat of Arm, National Flag called Kumerican flag. They claim to have developed (or created) their own currency called Kumerican Dollar (K$). They have Kumerican Passport. The Kumerican slogan or motto is "They Can't War With Us" and "Stronger than the Apartheid". With time we will update and document every development about this Kumericans especially their music and lifestyles.

Retrieved from "https://en.everybodywiki.com/index.php?title=Kumerica_and_Kumerican&oldid=999864"
Hidden category:
This page was last edited on 7 September 2020, at 23:10.
This page has been accessed 1,375 times.
Content is available under License CC BY-SA 3.0 unless otherwise noted.
Privacy policy
About EverybodyWiki Bios & Wiki
Disclaimers