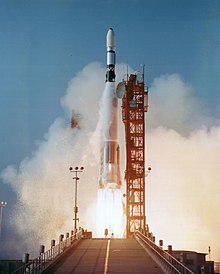 The Agena Target Vehicle as seen from Gemini 8 during rendezvous, March 16, 1966

The Atlas LV-3A was a mainly unsuccessful rocket until a Agena B upper stage was added to it as an upper stage. It was responsible for the launch of Mariner 2 to Venus and had one of the first engines that could be restarted in orbit.

The Atlas LV3A and Agena B launcher have flown a total of 8 times with 3 successful and 5 failed launches.[1]

Retrieved from "https://en.everybodywiki.com/index.php?title=List_of_Atlas_LV3A_launches&oldid=1745895"
This page was last edited on 28 May 2021, at 18:15.
This page has been accessed 140 times.
Content is available under License CC BY-SA 3.0 unless otherwise noted.
Privacy policy
About EverybodyWiki Bios & Wiki
Disclaimers