Lobsang Nyandak, sometimes written Lobsang Nyendak (Tibetan: བློ་བཟང་སྙན་གྲགས, Wylie: blo bzang snyan grags) also called Lobsang Nyandak Zayul (Tibetan: བློ་བཟང་སྙན་གྲགས་རྫ་ཡུལ, Wylie: blo bzang snyan grags rdza yul) is a Tibetan diplomat and politician.[1][2] born in 1965 in Kalimpong, India where he performed his studies in Herbertpur and at Panjab University in Chandigarh. There, he held functions at Tibetan Youth Congress before becoming the founding Executive Director of the Tibetan Centre for Human Rights and Democracy. Member of the National Democratic Party of Tibet, he was elected deputy and was selected as a minister by Samdhong Rinpoche (Lobsang Tenzin), the first elected Kalon Tripa of Central Tibetan Administration (CTA). He then was the Representative of the 14th Dalai Lama to the Americas and became president of The Tibet Fund.[3]

Nyandak was born in Kalimpong, India in 1965 to a Tibetan refugee family.[4] He completed his elementary and high school education at SFF Tibetan School in Herbertpur, India,[5] a school for children of Tibetan families recruited into the Special Frontier Force (SFF).[6] Nyandak graduated from Panjab University in Chandigarh, India, with a B.A. and a B.Ed. in 1986.[5][7]

Lobsang Nyandak and Richard Gere during The Tibet Fund annual gala at Le Bernardin Privé in New York on October 19, 2016

Nyandak was the founding Executive Director of the Tibetan Centre for Human Rights and Democracy (TCHRD), a non-governmental human rights organisation established in January 1996 in Dharamsala.[11] He represented Tibetans at international conferences, such as in 1997 at the the UN Human Rights Commission[12]; in 1998 at a conference-debate on Human Rights and Asian values organized by International Federation for Human Rights and Wei Jingsheng on the sidelines of the UN Human Rights Commission session in Geneva[13]; in 2001 at the World Conference against Racism in South Africa.[14] Following his appointment as minister in 2001, Nyandak served as Vice Chairman of the Board of Directors of the TCHRD from 2001 until 2004.[15]

In 1996, Nyandak was elected to the Tibetan Parliament, to represent the province of Kham in Eastern Tibet.[16] During this period, Nyandak also served as Vice President and Secretary of the Executive Committee of the National Democratic Party of Tibet.[4]

As Minister of Finance, Nyandak oversaw the overall financial health of the CTA[26][27] and established Tibetan business bodies, including the Tibetan Chamber of Commerce.[28][29] During this time period, Nyandak also served as Vice-Chairman of the Board of Directors of the CTA's Social and Resource Development Fund (SARD)[30] and Managing Trustee of the Dalai Lama's Charitable Trust.[15]

Lobsang Nyandak (on the right end) with other representatives of the Dalai Lama from around the world at a two-day meeting in Dharamsala october 2009 (the Dalai Lama is in the center with Samdhong Rinpoche).

Nyandak moved to the United States with his family in 2007 and joined the Tibet Fund as its Development Director in 2008 until he was appointed as the Representative of the 14th Dalai Lama at the Office of Tibet in United States from September 2008 to 2013.[31][32][33] He was responsible for organizing visits of the Dalai Lama to North America, including arranging meetings with leaders and educators.[34][35][36] 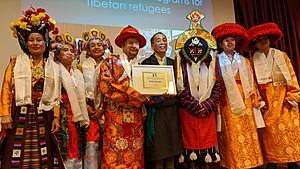 In 2013, Nyandak was appointed as the Executive Director of the Tibet Fund,[37] and in 2017, he became President of the organization.[38]

On March 2, 2020,[8] Lobsang Nyandak publicly announced his candidacy for the 2021 election of Tibetan Prime Minister (Sikyong).[41]

In his program, he declares he is confident to re-establish contact with the Chinese Government to resolve the Tibetan issue, and aims to transform Tibet in a peace zone, as envisaged by the 14th Dalai Lama[42]

Nyandak has been married for 30 years to Tenzin Palmo. They have three children.

Retrieved from "https://en.everybodywiki.com/index.php?title=Lobsang_Nyandak&oldid=1153124"
Hidden categories:
This page was last edited on 4 December 2020, at 08:43.
This page has been accessed 886 times.
Content is available under License CC BY-SA 3.0 unless otherwise noted.
Privacy policy
About EverybodyWiki Bios & Wiki
Disclaimers