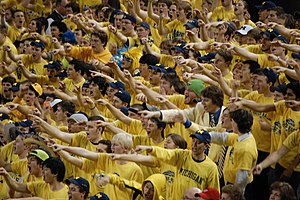 The Maize Rage during a Michigan vs Ohio State men's basketball game on February 16, 2008

The Maize Rage was unofficially founded in the mid to late 1990s and was officially recognized in the year 2000 by University of Michigan students. Since its formation, the Maize Rage has transformed Crisler Center into one of the most distinctive home court advantages in the Big Ten and NCAA.

As the name suggests, the game day attire is anything yellow, or more specifically, "maize". However, on certain occasions, there will be specific themed games, including, but not limited to, Star Wars, Social media, and Poole Party (which is a pun on pool parties).

The front row of section 130, nicknamed Beeline as a pun on coach John Beilein's name, dresses in bee suits

Retrieved from "https://en.everybodywiki.com/index.php?title=Maize_Rage&oldid=927603"
This page was last edited on 6 August 2020, at 19:35.
This page has been accessed 271 times.
Content is available under License CC BY-SA 3.0 unless otherwise noted.
Privacy policy
About EverybodyWiki Bios & Wiki
Disclaimers