As a child Margarete contracts Polio. Nevertheless, she continues to attend school and impresses the teacher with her self-confidence. When she is a young woman, a Viennese doctor chooses her as a promising candidate for a treatment. Her family cannot afford it, but her community provides financial support. The treatment fails, and Margarete resolves to live as a close to a normal life as she can regardless.

She meets Julius, a representative of a sewing machine company, while on a train. He sells the family a machine, and he and Margarete fall in love; they settle in Margarete's hometown. Despite initial problems with the sewing machine, Margarete begins to sell clothing; her talent is recognized and she is able to sell at the Christmas market. Julius leaves her to marry her friend Charlotte, and Margarete buries herself obsessively in her work.

Later, Margarete has opened her company, but is in debt and under pressure to sell to the bank. A small toy bear, which served as a symbol of the bond between her and her brother, gives Margarete the idea to create toy bears with moveable arms. She refuses the terms of sale with the bank, and she and her seamstresses beginn to make toy bears. The soft teddy bears they make become extremely popular, and the coninuation of her company is ensured when an American places a large order.

The Viennese Dr. Werner is based on August Hermann Werner. He operated on Margarete Steiff, and she lived in his house for a short time. However, he practiced in Ludwigsburg and Bad Wildbad, not Vienna.

Margarete's nephew Richard Steiff took over the company from his aunt in 1897 and developed Prototype 55 PB, the iconic teddy bear, in 1902; he also planned the Steiff Factory. 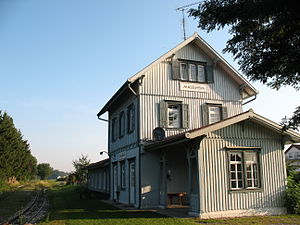 Filming was conducted between May and June 2005 in Bad Wimpfen.[1] The historical train station in Maselheim was used for filming July 21-22, serving as the train station in Giengen.[2] As the film was produced entirely during the summer, the winter scenes required fake snow. Many of the interior shots were taken in the museum Hohenloher Freilandmuseum Wackershofen. The film was produced by the Munich company Film-Line Productions GmBH and the Austrian Epo-Film.