Greenwald was born on May 7, 1940 in Camden, New Jersey, the daughter of Louis and Carmella (Corrado) Ciarrocchi. She attended Pierce Junior College in Philadelphia, graduating in 1960. She worked as a teacher at the Trinity Presbyterian Nursery in Cherry Hill from 1973-1976, and as an employment counselor at Snelling & Snelling, 1976-1977.

Greenwald began her political career when she was elected to the Cherry Hill Township Council, and served as the community's first woman mayor, from 1977 to 1979. In 1981, she became the first directly elected mayor under a new form of government, a post she held until 1987.[2] 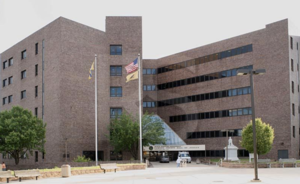 Greenwald died in January 1995 in a car crash when her car ran off a rain-slick road and struck a tree.[2][4] The Camden County Hall of Justice, the county courthouse for Camden County located in the county seat, the City of Camden, was dedicated to her in 1996. The 47-acre Maria Barnaby Greenwald Memorial Park in Cherry Hill is also dedicated to her memory.[5] Maria's Women United is a political association founded in 2016 and named in Greenwald's honor.[6]

She was married to Floyd T. Greenwald (d. 2001), who worked for the South Jersey Port Corporation. They had two sons, Thomas and Louis Greenwald (b. 1967), who has served in the New Jersey General Assembly since 1996, where he represents the 6th Legislative District.[7]