Marvin Bryant Ramirez (born May 20, 1989) is an American professional basketball player for the FastBreak De Cali of the Liga Profesional de Baloncesto Colombiano. He is a 1.88 m. tall point guard.

On May 1, 2010, he signed Colombia at Inder–Valle de Cali, Colombia for the Copa Federacion.[3]

On January 20, 2011 he stays In Colombia and signs with Fast Break de Cali, Colombia.

On August 4, 2012 he agreed to a deal with Cafeteros de Armenia, Colombia.

On April 25, 2013 he signs with Canerors Del Este, for the Liga National de Baloncesto, Dominican Republic.

Marvin Ramirez Signs With Once Caldas 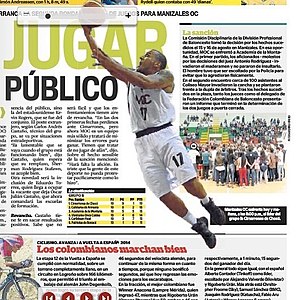 Retrieved from "https://en.everybodywiki.com/index.php?title=Marvin_Ramirez&oldid=1138499"
This page was last edited on 21 November 2020, at 17:00.
This page has been accessed 77 times.
Content is available under License CC BY-SA 3.0 unless otherwise noted.
Privacy policy
About EverybodyWiki Bios & Wiki
Disclaimers
Mobile view