The dragons play a significant role in the legendary accounts on the Meitei folklore as well as Meitei mythology.[1][2][3][4]

The illustration of the Kanglasha, a mythical dragon in the Emblem of Manipur.

The motifs of the supernatural Hiyang Hirens, presented as a part of the tableau of Manipur state, in possession of the parade in New Delhi.

The Hiyang Hiren, also spelt as Hiyang Hilen, is said to be a well furnished race boat, often crafted in the form of a dragon headed and tailed one. Many legends say that it possesses spiritual powers. So, it is counted as one of the mythical creatures in the mythology.

Nongshaba, the dragon lion, is also known as Kanglasha, the dragon of the Kangla, the metropolis of Ancient Manipur kingdom. He is a child of Atingkok, the Supreme Being. Unlike his siblings, he always remains in the form of the mythical beast rather than that of a God (human figure).[5][6][7]

Pakhangba is the youngest son of Leimarel Sidabi, the supreme mother earth goddess. He was given the throne of the universe to protect and rule the world by Atingkok, his father. He could transfigure himself into both the forms of a serpentine dragon as well as divinity (human figure). Several legends revolve around his identity as an ancient historical figure though many scholars opined those facts as proposed ones.[8][9][10][11] 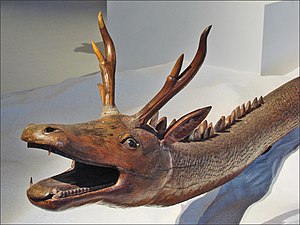 Poubi Lai, the tyrant dragon serpent of the primitive Loktak lake, is one of the popular figures in Meitei folklore and mythology. There are various sagas about this gigantic leviathan, who once gained its fame through its notorious nature.[12][13][14]

Taoroinai, also spelled as Taoloinai, is a mythical dragon serpent, who dwells in the cosmic ocean. It is known for bringing down the divine celestial egg (nonglum) down to earth.[15][16][17]

There are seven great celestial dragons born to Pakhangpa. They are:

This article "Meitei dragons" is from Simple English Wikipedia. The list of its authors can be seen in its historical and/or the page Edithistory:Meitei dragons.

Retrieved from "https://en.everybodywiki.com/index.php?title=Meitei_dragons&oldid=1713563"
Categories:
Hidden categories:
This page was last edited on 12 May 2021, at 12:07.
This page has been accessed 137 times.
Content is available under License CC BY-SA 3.0 unless otherwise noted.
Privacy policy
About EverybodyWiki Bios & Wiki
Disclaimers