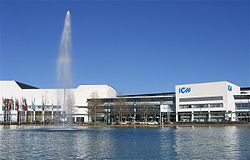 Partners of Messe München are the Free State of Bavaria and the City of Munich. Chairman of the Board since January 2010 is Klaus Dittrich. In the exhibition area there are exhibition rooms, the exhibition hall, exhibition tower and the International Congress Centre Munich (ICM). The architects were Bystrup Architecture Design Engineering, Bregenhøj + Partners, Kaup, Scholz, Jesse + Partner.

Messe München is a member of the AUMA, FKM, GDG, UFI, and CEFA trade associations.

After moving the fair from the city center to the former airport site in Messestadt Riem allowing the exhibition companies, along with the Neue Messe Munich, to have one of the most modern and sustainable trade fair complexes in the world and it has been certified as an energy-efficient company by TÜV Süd. With one of the largest Photovoltaic roof systems in the world and a sophisticated energy concept to an annual saving of more than 8,000 tons of CO2. The entire exhibition center is heated with renewable energy through a geothermal system from Stadtwerke München.

The most visited event at the Munich Trade Fair Center is the construction fair bauma, also the world's geographically largest fair, which takes place every three years and attracted some 580,000 visitors in 2016. Large public exhibitions are the f.re.e, the Heim + Handwerk and the Internationale Handwerksmesse. Important trade fairs include the ISPO, analytica, AUTOMATICA, BAU, and drinktec. Other exhibitions in Munich are EXPO REAL, IFAT, intersolar Europe, Laser World of Photonics, Transport Logistic, eCarTec and the yearly alternating productronica and electronica.[3]

In 1908 the original Exhibition Park opened on the Theresienhöhe located behind the Ruhmeshalle; the fair moved at the end of 1998 to the new center in Munich-Riem.

In its former location, the Messegelände consisted of twenty buildings located in the greater Munich area. During the 1972 Summer Olympics, five of these venues served as host to the fencing, the fencing part of modern pentathlon, judo, weightlifting, and wrestling events.[4] These were:

Share
Retrieved from "https://en.everybodywiki.com/index.php?title=Messe_München&oldid=1686201"
Categories:
Hidden categories:
This page was last edited on 5 May 2021, at 16:15.
This page has been accessed 257 times.
Content is available under License CC BY-SA 3.0 unless otherwise noted.
Privacy policy
About EverybodyWiki Bios & Wiki
Disclaimers
Dark mode