Michael Joseph Schwartz (Mike Schwartz) (born November 23, 1975) is an American entrepreneur and CEO of Michael J Schwartz and Associates, founder of the Seaside Music Festival and founder of Hometown Heroes, a non-profit organization. He resides in Toms River, New Jersey and maintains an office in downtown Toms River. Schwartz is the son of Joseph Schwartz and Judy Schwartz He is the eldest of 2 children. His sister Laura resides in South Carolina and works in nursing. His parents divorced in 1985. Born Roman Catholic he attended St Josephs grade school in Toms River, New Jersey and Toms River High School South Schwartz, many years later, enrolled at the University of Phoenix and completed his degree with Touro University earning a Bachelor of Business Administration. 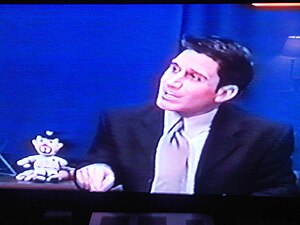 After a small tenure lifeguarding and doing odd jobs to make ends meet, Schwartz started his first company in 1993 called Cycletone. After only 6 months in business a disagreement with a partner caused the business to divide and Schwartz started his own company called Toner Concepts. As CEO of Toner Concepts Schwartz began to get more involved in the local and state political system in New Jersey. He contributed to many campaigns and started volunteering his time to help run local and regional campaigns.

During this time Schwartz also got his feet wet in the music business. In the mid 1990s Schwartz met good friend Michael Ferentino who was signed to the Warner Reprise Records Label with his band Love In Reverse. When Ferentino's band wasn't getting the airplay that both Schwartz and Ferentino felt was necessary to promote the group, Schwartz called Howie Klein, President of Reprise Records in Hollywood CA. and Jon Zazula and Marsha Zazula, Ferentino's manager to discuss options. Schwartz then bought airtime on a local station, WRAT and put together a showcase in Seaside Heights New Jersey for Ferentino's band to play. The show was a resounding success, at which time Ferentino's manager, Jon Zazula, suggested that Schwartz open his own independent record label. Schwartz, flattered at the suggestion then began to put the pieces in place to open up his own media company. In 1998 Schwartz opened Origin Recordings and promptly signed 4 groups. While dabbling in the music business Schwartz would meet his future partner in the Seaside Music Festival, Jose Antau. After 3 years of producing shows and albums Schwartz decided to close the label in 2001. Schwartz later produced and starred in a show on Cablevision called "The Big Time with Mike Schwartz" At this time Schwartz made numerous runs on the comedy circuit as Michael Schwartz trying out new material for the show. The show was successful in its first year but Schwartz decided not to exercise the option for a second year citing time constraints.

While working on campaigns Schwartz started putting together manuals and reports on how he felt these campaigns should be run. He was hired by the Toms River Republican Party to do some consulting work on their local campaigns. Later he was hired by the Brick Township Republican Club and the Keansburg Republican Club. In 2002 he was hired by James Treffinger, Essex County Executive to consult on his bid for United States Senate but Treffinger dropped out of the race after being indicted by US Attorney Chris Christie. Schwartz continued to run campaigns throughout the state of New Jersey and in 2008 worked with John McCain on his presidential primary. Schwartz boasts a perfect record of 32-0 for all the seats he has run as manager or as a consultant.

In 2004 Schwartz joined the Toms River Township Auxiliary Police Department. He continues to serve as a volunteer officer in the Township of Toms River Auxiliary Police Department with limited duty. In late 2004 Schwartz decided to venture into law enforcement full-time. He was hired by the Seaside Heights Police Department on December 14, 2004 and entered into the Ocean County Police Academy on December 22, 2004. After graduation from the Ocean County Police Academy, Schwartz worked with the Seaside Heights Police Department until September 2009. Schwartz suffered a knee injury in August 2008 forcing him to go on limited duty and eventually ending his career in law enforcement. While in the police academy Schwartz took an interest in a body language and communications course. He continued his studies and now teaches his own course on this matter at Temple University in Pennsylvania. Schwartz also offers this course to private corporations.

In 2005, after graduation from the police academy Schwartz promptly got back into business starting Michael J Schwartz and Associates. The company focuses on real estate title and land surveys and is located in Toms River, New Jersey. Schwartz earned his New Jersey Title Producers License in 2007 and continues to function as a New Jersey Licensed Title Producer.

In 2007 Schwartz teamed up with longtime friend Jose Antau, also known as Indian to develop a project which would later be called the Seaside Music Festival. After about a year of planning the festival kicked off on May 15, 2008 with an approximate 70,000 people in attendance. In its inaugural year the Seaside Music Festival was a 4-day event hosting about 170 bands from around the world to play music of all types with additional shows, parties and sponsor driven events. Former MTV jock, Matt Pinfield was the host for the festivals first year. The first year Schwartz and Antau partnered with WHTG but since 2009 have partnered with Millennium Radio New Jersey. In 2011 Millennuium Radio New Jersey was purchased by Town Square Media but the company continues to serve as a media partner to the Seaside Music Festival.

Schwartz has been a member of Rotary International since 2000 and has served as president of the Seaside Rotary since July 2009. He has served on multiple boards including the Toms River Board of Adjustment, Berkeley Township Board of Adjustment, Executive Board of Big Brothers and Sisters of Ocean County as well as their Honorary Board, Toms River Municipal Alliance, Ocean County Young Republicans and others. Schwartz has won numerous awards including the United Ways Top 40 under 40 award and was also nominated for the United Ways Young Altruistic Professional Award in 2010. He has received a Class A meritorious service award and a Class C meritorious service award from the Toms River Police Department. Schwartz, an avid flyer, got his pilots license in 2003 and flies single engine planes. He is single and has no children.

Retrieved from "https://en.everybodywiki.com/index.php?title=Michael_J._Schwartz&oldid=932652"
Categories:
Hidden categories:
This page was last edited on 8 August 2020, at 11:16.
Content is available under License CC BY-SA 3.0 unless otherwise noted.
This page has been accessed 575 times.
Privacy policy
About EverybodyWiki Bios & Wiki
Disclaimers