Military equipment of the European Union

This article outlines the military equipment owned by the member states of the European Union (EU), multinational procurement and EU-level facilitation of such procurement.

In accordance with the Treaty on European Union it is the national armed forces' assets that are made available for the implementation of the EU's Common Security and Defence Policy (CSDP), which involves overseas operations (since 2003) and an obligation of collective self-defence.[lower-alpha 1] It should be noted that CSDP decisions, adopted by the Foreign Affairs Council (FAC), generally require unanimity between member states. Consequently, any deployment of national assets in a CSDP context is voluntary on the member state's part.

The European Defence Fund may facilitate the multinational procurement and development of equipment, which is owned by member states: The European Border and Coast Guard is the only part of the CSDP that is able to purchase its own equipment.[1]

Since 2011 the European Border and Coast Guard Agency has been able to purchase its own equipment (e.g. vessels, communications technology), for use in its work to patrol the external borders of the Schengen Area.[2]

Traditionally European countries have either developed their own weapon systems or bought 'off the shelf' systems usually NATO-sponsored from the United States or from the Soviet Union, now from Russia. In the modern era, reduced military budgets and increasing complexity make it difficult for most countries to develop their own weapon systems.[citation needed] Furthermore, identical projects in differing countries were recognised as a waste of resources. However the same countries often do not wish to purchase American systems because of the perception of a loss of sovereignty and the profits (and jobs) going to American companies.[citation needed] Likewise they hope to establish a profitable export competing the American one.[3]

Therefore, some European nations are attempting to pool their resources to create multinational programmes to create a more independent and competitive capability. The European Defence Agency was established in 2004 to create such a stronger European market for military equipment.

The European Defence Fund is an EU fund for coordinating and increasing national investment in defence equipment research and improve interoperability between national forces. It was proposed in 2016 by President Jean-Claude Juncker and established in 2017 to a value of €5.5 billion per year. The fund has two stands; research (€90 million until the end of 2019 and €500 million per year after 2020) and development & acquisition (€500 million in total for 2019–20 then €1 billion per year after 2020).[4]

Together with the Coordinated Annual Review on Defence and Permanent Structured Cooperation it forms a new comprehensive defence package for the EU.[5]

The fund will co-finance 20% of eligible defence projects. Projects based on the CSDP's Permanent Structured Cooperation (PESCO) qualify for higher co-financing rates.[6]

The Eurofighter Typhoon is the latest in a line of joint aircraft projects between the Western European powers. Previously the United Kingdom, Germany and Italy had cooperated in producing the Panavia Tornado in the 1970s, and the UK and France had cooperated in producing the SEPECAT Jaguar. The Eurocopter Tiger is developed by France and Germany and was also bought by Spain. Franco-Italian naval projects include the Horizon class frigates and FREMM multipurpose frigates.

In 2002 the formation of MBDA brought together the product portfolios of Aerospatiale Matra Missiles (of EADS), Alenia Marconi Systems missiles, and Matra BAe Dynamics to form Europe's No. 1 missile manufacturer and No. 2 globally after Raytheon.

Other major players include

Below are some examples of European products and the previously used weapons they may replace.

There are several examples where one country continues to pursue purely national programmes because collaboration would be unacceptable or undesirable. For example, both the UK and France continue to develop and operate independent nuclear deterrent. Likewise France's desire for military and industrial independence has motivated its continued pursuit of high-technology projects, e.g. Dassault Rafale.

Multinational programmes can fail because of disagreements about price or capability. For example, while the UK terminated its collaboration with France and Italy on the next generation frigate (Horizon CNGF) and started a national Type 45 programme. However the warships will share some systems, primarily the MBDA Aster missile.

Former British Prime Minister Tony Blair came under pressure from President Bill Clinton to select Raytheon's future missile to arm the Eurofighter,[8] however the UK government selected the European Meteor air-to-air missile. The Meteor could be deemed riskier, however the Meteor armed Typhoon will not be subject to U.S. export controls and MBDA now has a missile product with no real competition from American manufacturers.[citation needed]

Likewise European governments were actively dissuaded by the US Department of Defence from continuing the A400M project, the Pentagon argued that the Lockheed C-130J and Boeing C-17 provided all the capability European governments needed and were already flying.[citation needed] The DOD also argued that to spend limited budgetary resources on such duplication was foolish. The previous generation American fighter plane (F-16) was widely sold throughout Europe.[citation needed]

Airbus Group CEO Tom Enders has called the difficulties in coordinating European investment in the A400M program a "horror", and said "I am determined, at least for my company, not to ever again walk into such a program".[9]

French President Macron and German Chancellor Merkel have signalled their countries intention to co-operate on the development of a future combat aircraft to be produced as a replacement for Dassault Rafale and Eurofighter Typhoon.[10][11]

Code of Conduct on Defence Procurement[edit]

The European Union has adopted a code of conduct[12] with the objective to inject transparency and competition into the military procurement. It is administered by the EDA and under its scope are contracts under Article 346 of TFEU, of at least €1 million and with the exclusions of weapons of mass destruction, cryptographic equipment and other procurements.

As of 2009 the code is adopted by Norway and all EDA members except Romania, who may join later.[13] 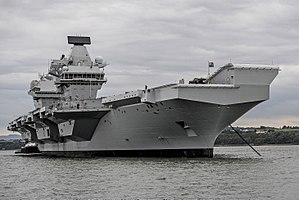 The aircraft carrier HMS Queen Elizabeth is the largest commissioned warship in service with the UK Royal Navy, one of the EU Member States' naval forces.

The combined component strength of the naval forces of member states is some 563 commissioned warships. Of those in service, 4 are fleet carriers, the largest of which is the 70,600 tonne Queen Elizabeth-class carrier and one has a nuclear propulsion, the French Charles de Gaulle aircraft carrier. The EU also has 5 amphibious assault ships and 25 amphibious support ships in service. Of the EU's 63 submarines, 21 are nuclear-powered submarines while 42 are conventional attack submarines.

Operation Atalanta (formally European Union Naval Force Somalia) is the first ever (and still ongoing) naval operation of the European Union. It is part of a larger global action by the EU in the Horn of Africa to deal with the Somali crisis. As of January 2011 twenty-three EU nations participate in the operation. 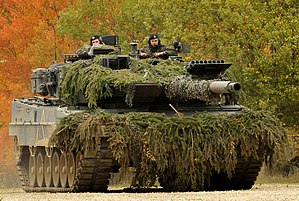 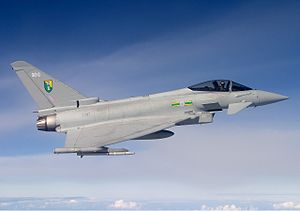 A Eurofighter Typhoon of the Royal Air Force

The air forces of EU member states operate a wide range of military systems and hardware. This is primarily due to the independent requirements of each member state and also the national defence industries of some member states. However such programmes like the Eurofighter Typhoon and Eurocopter Tiger have seen many European nations design, build and operate a single weapons platform. 60% of overall combat fleet was developed and manufactured by member states, 32% are US-origin, but some of these were assembled in Europe, while remaining 8% are soviet-made aircraft. As of 2014, it is estimated that the European Union had around 2,000 serviceable combat aircraft (fighter aircraft and ground-attack aircraft).[35]

The EUs air-lift capabilities are evolving with the future introduction of the Airbus A400M (another example of EU defence cooperation). The A400M is a tactical airlifter with strategic capabilities.[36] Around 140 are initially expected to be operated by 6 member states (UK, Luxembourg, France, Germany, Spain and Belgium).

Retrieved from "https://en.everybodywiki.com/index.php?title=Military_equipment_of_the_European_Union&oldid=933543"
Categories:
Hidden categories:
This page was last edited on 8 August 2020, at 21:21.
This page has been accessed 762 times.
Content is available under License CC BY-SA 3.0 unless otherwise noted.
Privacy policy
About EverybodyWiki Bios & Wiki
Disclaimers