Nora Bergstrom (born December 25, 2002), better known as Orphie, is an american singer/songwriter from Saint Paul, Minnesota. She is a member of the V&V collective, and began her career in January 2018 with her first single, "Saint". It was originally released on Soundcloud, and quickly gained popularity within her community. 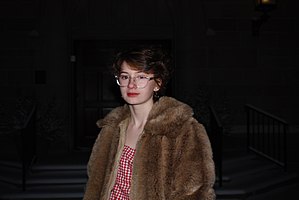 Retrieved from "https://en.everybodywiki.com/index.php?title=Nora_Bergstrom&oldid=939167"
Category:
Hidden category:
This page was last edited on 10 August 2020, at 02:18.
This page has been accessed 107 times.
Content is available under License CC BY-SA 3.0 unless otherwise noted.
Privacy policy
About EverybodyWiki Bios & Wiki
Disclaimers
Mobile view