This name uses Spanish naming customs: the first or parental family name is Garcia and the second or maternal name is Von Borstel.

Octavio Garcia-Von Borstel was born in Nogales, AZ on February 19, 1980. He is an American politician and entrepreneur. He served as the 38th Mayor of the City of Nogales, AZ at age 27, making him one of the youngest active Mayors in the United States.[1] He currently holds the position of Chairman for the OGVB Group and performs duties as ambassador between local, state and federal governments.[2] He resides in Tucson, AZ.

During his tenure as Mayor he led efforts in partnership with the Greater Nogales Santa Cruz County Port Authority to fund (US $200 million) for the expansion of the Nogales Mariposa Port of Entry making it one of the largest ports of entry between the United States and Mexico.[3][4][5][6][7][8] He lobbied the US Federal Government to allocate (US $750,000) to the study and re-design of the International Outflow interchange between the United States and Mexico.[9][10][11][12][13][14] He built two main city parks, Meadow Hills Park and Camp Little Park, before his tenure the last park that had been built was in 1982.[15][16][17] Before leaving office he completed the Old City Hall Historic Restoration Project[18] and advocated for the funding (US $66 million) to upgrade the Nogales International Waste Water Treatment Plant awarded by the US Environmental Agency.[19] All of these projects hold a plaque with his name on them today commemorating his efforts. He was the first to create an Economic Development Department focused on promoting diverse types of business markets, tourism and revenue increase.[20] He obtained a AA bond rating from Standard & Poors making it one of the highest in city’s history and retained 100% of city employment during an economic recession.[21] He later put his philanthropy skills together to partner with Nogales High School and create the first annual Mayor’s Thanksgiving food drive hosted by the Nogales Fire Department and sponsored by the local business community.[22] He is known to have a distant power base with liberal credibility and viewed as an anti border wall crusader.[23] He is listed as a contemporary notable of the name Borstel.[24] 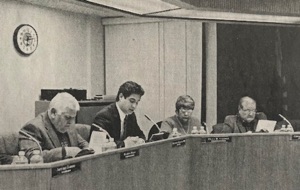 Known as the "Morally Repugnant" law, on May 10, 2010, the Nogales City Council unanimously approved a resolution apposing the Arizona immigration law measure. Octavio Garcia-Von Borstel criticized and apposed the new immigration law. He stated "SB 1070 will inevitably lead to racial profiling, jeopardize public safety and create a wedge between law enforcement and ethnic communities." He promoted such efforts beyond the border meeting with Mexican counterparts including, Nogales, Sonora Mayor, the Governor for the state of Sonora and the Secretary of State of Mexico.[25][26][27][28][29][30][31][32]

In 2007, the City of Nogales, AZ witnessed an increase of border violence in Nogales, Sonora, Mexico.[33] Whether merited or not, business and tourism took a negative effect.[34] With the creation of an Economic Development department and with the strengthening of international relationships with Mexico, Octavio Garcia- Von Borstel hoped to instill confidence to tourists and business investors.[35][36] However, not long after creating the Economic Development department it was dismantled by the majority of the city council removing funding from the annual budget. Octavio Garcia- Von Borstel participated in the minority vote and voted against the measure.[37]

The City of Nogales General Plan led by his administration consisted of three volumes.[40]

The last General Plan had been adopted in 1992. The last attempted effort was in 2003 however, failed to pass by voters. On May 17, 2011, voters approved Proposition 401 and this general plan was adopted.[41]

He studied at the University of Arizona (School of Geography and Development) and has two post secondary education studies from Harvard University (John F. Kennedy School of Government) and Cornell University (School of Executive Education).

Garcia-Von Borstel favors legislation to eventually grant citizenship to the estimated 20 million illegal aliens in the United States and the creation of an additional guest worker program with an option for permanent immigration. He is in vigorous disagreement with any legislation or action separating immigrant families.[42]

Garcia-Von Borstel is a strong proponent of free trade. He supports the North American Free Trade agreement and opposes renegotiations of agreements. He states that the United States should engage in multilateral, regional and bilateral efforts to reduce barriers to trade.[43]

Garcia-Von Borstel supports the use of school vouchers and favors merit pay for teachers, along with firing them if they don’t meet certain standards. He also expresses support for increasing the funding of Pell Grants stating that the government should not burden our young men and women after college with debt.[45]

Garcia-Von Borstel opposes the federal minimum wage and instead, believes each state should decide its own minimum wage.[46]

Garcia-Von Borstel is a supporter of the 2nd Amendment right and opposes the efforts of the anti-gun crowd to ban guns, ammunition and magazines.[48]

Garcia-Von Borstel supports expanding the use of federally funded drug treatment and prevention programs and forging public/private partnerships. Furthermore, he supports the authorization of funding the international development funds to stop illegal narcotics. As Mayor, he led efforts to have every local elected official test for the use of illegal drugs in efforts to promote a drug free zone campaign. However, not all elected officials participated.[49]

Garcia - Von Borstel favors civil unions for all, he believes everyone should have equal rights and be able to enter legal agreements in particular in the cases of insurance and community property.[50]

Garcia-Von Borstel promotes the reduction of government spending in favor of tax cuts on middle-income Americans.[51]

He is a member of the University of Arizona Alumni Association and a member of Sigma Chi Fraternity (Beta Phi Chapter) where he served as Philanthropy Chair, Social Chair and President. He is an avid community organizer and advocate who continues to diligently support and influence political campaigns in furtherance of advancing the economy, promoting equal rights, improving quality of life, education and international trade. In 2018 he founded the Octavio Garcia-Von Borstel Breast Cancer Foundation. It is a non-profit, volunteer advocacy group in furtherance of bringing awareness and improving the quality of life for breast cancer patients in the United States and Mexico.[64]