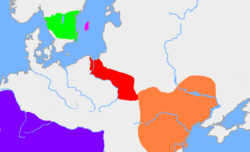 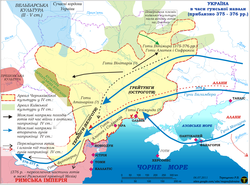 Oium or Aujum was a name for an area in Scythia (modern Ukraine), where the Goths, under King Filimer, arguably settled after leaving Gothiscandza, according to the Getica by Jordanes, written around 551.[1][2][3] Jordanes does not give an etymology, but many scholars interpret this word as a dative plural to the widespread Germanic words *aujō- or *auwō- and means "well-watered meadow" or "island".[2]

Archaeologically, the Chernyakhov culture, which is also called the Sântana de Mureș culture, contained parts of Ukraine, Moldova and Romania and corresponds with Gothic Scythia.[10]

Jordanes states that King Filimer led the Goths in a search for suitable lands; when they arrived in Oium, they were delighted with the richness of the land. They crossed a bridge to get there, but when half the army[11] had made it across, the bridge fell into ruin and so no one else could pass into the area anymore. According to Jordanes, the Goths claimed the land for themselves and defeated the previous inhabitants, the Spali.[12]

The Goths left Oium in a second migration to Moesia, Dacia and Thrace, but they eventually returned, settling north of the Black Sea. Upon their return, they were divided under two ruling dynasties. The Visigoths were ruled by the Balþi and the Ostrogoths by the Amali. The account fits the patterns of the Wielbark culture and the Chernyakhov culture and the Santana de Mureş culture, which show a Germanic migration from the Vistula Basin to Ukraine.[13]

Merger with Scythian, Dacia and Thracian histories from classic sources[edit]

After Tanausis died, the Goths were said to have embarked on another expedition, and a neighbouring tribe tried to kidnap the Gothic women. However, the women defended themselves and defeated the attackers under the leaders Lampedo and Marpesia. The two leaders cast lots, and Marpesia pursued the enemy into Asia, where she conquered many tribes and apparently formed the Amazons.[16]

At another point in the narrative, Philip II of Macedon allied with the Goths by marrying Medopa, the daughter of King Gudila. However, Philip needed gold and wanted to pillage the town of Odessos, a town belonging to the Goths. The Goths sent out their goðis, who were dressed in white and played harps, chanting to their gods to help them. That stunned the Ancient Macedonians so much that they returned.[17]

According to Jordanes, a king, Sitalces, wanted revenge much later, and he gathered 150 000 men to attack the Athenians. He fought Perdiccas II of Macedon, whom Alexander I had left as a ruler, and the Goths laid Greece waste.[18]

When Burebista was king, he had a priest named Decaeneus. He gave the Goths (Getae) (Dacians) laws, named bi-lageineis, taught them logic, philosophy and astrology. Then, he selected a priestly elite who was taught theology and named them the Pilleati. The remainder of the Goths (Dacian) were called the Capillati.[19]

A long time passed and the Romans were ruled by Emperor Domitian (AD 81-96). Domitian was set to conquer Dacia. As the Goths-Getae (historically, the Dacians) feared his avarice, they broke the truce with the Romans and pillaged the banks of the Danube and killed the soldiers and the generals. At this time Diurpaneus (King Duras-Diurpaneus of Dacia from 69 to 86 or Decebalus from 87 to 106) was king of the Goths-Getae (now Romania) and Oppius Sabinus was the governor of Moesia (having succeeded Fontejus Agrippa) (69–70). In 85 when Oppius Sabinus tried to conquer Dacians, the Goths (Dacians) beheaded Oppius Sabinus and plundered many Roman cities and fortifications. Domitian arrived with the legions to Illyria and sent Fuscus with a selected force. Fuscus used boats to build a pontoon bridge and crossed the Danube upstream from the Goths. The Gothic army defeated the Romans yet again and killed Fuscus and pillaged the Roman camp (86 AD). Several Romanian and American historians wrote about Jordanes' errors in considering that Getae were Goths.[21][22][23][24]

After this use of Dacian, Thracian and Scythian history, Jordanes returns to Gothic tradition by reciting the line of descent of the Gothic royal family from Gapt (Gaut or Odin).

The digression is followed by a statement that the Goths entered Moesia and Thrace in the late 2nd century where they stayed for some time. Based on Quintus Aurelius Symmachus, he writes that Emperor Maximinus Thrax (AD 235-238) was the son of a Goth who arrived at this time and an Alan woman.

In The origin of Rus', Omeljan Pritsak connects the Hervarar saga with its account of Gothic legendary history and of battles with the Huns, with historical place names in Ukraine from 150 to 450 AD,[25] This places the Goths' capital Árheimar, on the river Dniepr (Danpar). The connection to Oium was made by both Heinzel and Schütte.[26] However the attribution of places, people, and events in the saga is confused and uncertain, with multiple scholarly views on who, where, and what real things the legend refers to.

This article "Oium" is from Wikipedia. The list of its authors can be seen in its historical and/or the page Edithistory:Oium. Articles copied from Draft Namespace on Wikipedia could be seen on the Draft Namespace of Wikipedia and not main one.