Saint Catherine's Monastery (Arabic: دير القدّيسة كاترين‎; Greek: Μονὴ τῆς Ἁγίας Αἰκατερίνης), officially "Sacred Monastery of the God-Trodden Mount Sinai" (Greek: Ιερά Μονή του Θεοβαδίστου Όρους Σινά), is an Eastern Orthodox monastery located on the Sinai Peninsula, at the mouth of a gorge at the foot of Mount Sinai, near the town of Saint Catherine, Egypt. The monastery is named after Catherine of Alexandria.

The monastery is controlled by the autonomous Church of Sinai, part of the wider Greek Orthodox Church, and is a UNESCO World Heritage Site.[1]

Built between 548 and 565, the monastery is one of the oldest working Christian monasteries in the world.[2] The site contains the world's oldest continually operating library,[3] possessing many unique books including the Syriac Sinaiticus and, until 1859, the Codex Sinaiticus.[4][5]

Although it is commonly known as Saint Catherine's, the monastery's full official name is the Sacred Monastery of the God-Trodden Mount Sinai. The patronal feast of the monastery is the Feast of the Transfiguration. The monastery has become a favorite site of pilgrimage.

1899 map of the monastery surroundings 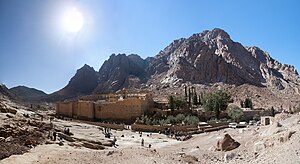 The oldest record of monastic life at Sinai comes from the travel journal written in Latin by a woman named Egeria about 381–384.[6] She visited many places around the Holy Land and Mount Sinai, where, according to the Old Testament, Moses received the Ten Commandments from God.[7]

The monastery was built by order of Emperor Justinian I (reigned 527–565), enclosing the Chapel of the Burning Bush (also known as "Saint Helen's Chapel") ordered to be built by Empress Consort Helena, mother of Constantine the Great, at the site where Moses is supposed to have seen the burning bush.[8] The living bush on the grounds is purportedly the one seen by Moses.[9] Structurally the monastery's king post truss is the oldest known surviving roof truss in the world.[10] The site is sacred to Christianity, Islam, and Judaism.[11]

A mosque was created by converting an existing chapel during the Fatimid Caliphate (909–1171), which was in regular use until the era of the Mamluk Sultanate in the 13th century and is still in use today on special occasions. During the Ottoman Empire, the mosque was in desolate condition; it was restored in the early 20th century.[12]

During the seventh century, the isolated Christian anchorites of the Sinai were eliminated: only the fortified monastery remained. The monastery is still surrounded by the massive fortifications that have preserved it. Until the twentieth century, access was through a door high in the outer walls. From the time of the First Crusade, the presence of Crusaders in the Sinai until 1270 spurred the interest of European Christians and increased the number of intrepid pilgrims who visited the monastery. The monastery was supported by its dependencies in Egypt, Palestine, Syria, Crete, Cyprus and Constantinople.

The monastery, along with several dependencies in the area, constitute the entire Church of Sinai, which is headed by an archbishop, who is also the abbot of the monastery. The exact administrative status of the church within the Eastern Orthodox Church is ambiguous: by some, including the church itself,[13] it is considered autocephalous,[14][15] by others an autonomous church under the jurisdiction of the Greek Orthodox Church of Jerusalem.[16] The archbishop is traditionally consecrated by the Greek Orthodox Patriarch of Jerusalem; in recent centuries he has usually resided in Cairo. During the period of the Crusades which was marked by bitterness between the Orthodox and Catholic churches, the monastery was patronized by both the Byzantine emperors and the rulers of the Kingdom of Jerusalem, and their respective courts.

On April 18, 2017, an attack by the Islamic State group at a checkpoint near the Monastery killed one policeman and injured three police officers.[17] 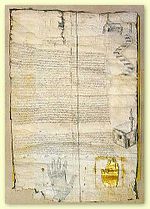 Ashtiname of Muhammad, granting protection and other privileges to the followers of Jesus

The monastery library preserves the second largest collection of early codices and manuscripts in the world, outnumbered only by the Vatican Library.[18] It contains Greek, Georgian, Arabic, Coptic, Hebrew, Armenian, Aramaic and Caucasian Albanian texts.

In May 1844 and February 1859, Constantin von Tischendorf visited the monastery for research and discovered the Codex Sinaiticus, dating from the 4th Century, at the time the oldest almost completely preserved manuscript of the Bible. The finding from 1859 left the monastery in the 19th century for Russia, in circumstances that had been long disputed. But in 2003 Russian scholars discovered the donation act for the manuscript signed by the Council of Cairo Metochion and Archbishop Callistratus on 13 November 1869. The monastery received 9000 rubles as a gift from Tsar Alexander II of Russia.[19] The Codex was sold by Stalin in 1933 to the British Museum and is now in the British Library, London, where it is on public display. Prior to September 1, 2009, a previously unseen fragment of Codex Sinaiticus was discovered in the monastery's library.[20][21]

In February 1892, Agnes Smith Lewis identified a palimpsest in St Catherine's library that became known as the Syriac Sinaiticus and is still in the Monastery's possession. Agnes and her sister Margaret Dunlop Gibson returned with a team of scholars that included J. Rendel Harris, to photograph and transcribe the work in its entirety.[22] As the manuscript predates the Codex Sinaiticus, it became crucial in understanding the history of the New Testament.

The Monastery also has a copy of the Ashtiname of Muhammad, in which the Islamic prophet Muhammad is claimed to have bestowed his protection upon the monastery.[23]

Additionally, the monastery houses a copy of Mok'c'evay K'art'lisay, a collection of supplementary books of the Kartlis Cxovreba, dating from the 9th century.[24]

The most important manuscripts have since been filmed or digitized, and so are accessible to scholars. With planning assistance from Ligatus, a research center of the University of the Arts London, the library was extensively renovated, reopening at the end of 2017.[25][26]

Since 2011, a team of imaging scientists and scholars from the U.S. and Europe has studied the library's collection of palimpsests.[8][27] The project's original leaders were history professor Claudia Rapp of the University of California, Los Angeles, and Michael Phelps of the Early Manuscripts Electronic Library.[27] Images from the project are freely available for research at the UCLA Online Library.[28]

Palimpsests are notable for having been reused one or more times over the centuries. Since parchment was expensive, monks would erase certain texts with lemon juice and write over them.[3][29] Though the original texts were once assumed to be lost,[6] the scholars used narrowband multispectral imaging techniques and technologies to reveal features that were difficult to see with the human eye, including ink residues and small grooves in the parchment.[8][18] Each page took approximately eight minutes to scan completely.[18]

As of June 2018, at least 170 palimpsests were identified, with over 6,800 pages of texts recovered.[18] Many of these newer finds were discovered in a secluded storage area in 1975.[8] Highlights include "108 pages of previously unknown Greek poems and the oldest-known recipe attributed to the Greek physician Hippocrates," as well as insight into dead languages such as Caucasian Albanian and Christian Palestinian Aramaic.[29][30] These images have subsequently been digitized and distributed online for scholarly use.[1][6]

The complex houses irreplaceable works of art: mosaics, the best collection of early icons in the world, many in encaustic, as well as liturgical objects, chalices and reliquaries, and church buildings. The large icon collection begins with a few dating to the 5th (possibly) and 6th centuries, which are unique survivals; the monastery having been untouched by Byzantine iconoclasm, and never sacked. The oldest icon on an Old Testament theme is also preserved there. A project to catalogue the collections has been ongoing since the 1960s. The monastery was an important centre for the development of the hybrid style of Crusader art, and still retains over 120 icons created in the style, by far the largest collection in existence. Many were evidently created by Latins, probably monks, based in or around the monastery in the 13th century.[31]

A panorama of St Catherine's

The Saint Catherine's Foundation is a UK-based non-profit organization that aims to preserve the monastery. The conservation of its architectural structures, paintings, and books comprise much of the Foundation's purpose. The Saint Catherine's Foundation works with its academic partner, the Ligatus Research Center at the University of the Arts, London, to raise awareness of the monastery's unique cultural significance via lectures, books and articles.[32] Founded on November 2, 2007 at the Royal Geographical Society in London needs new funds for the conservation workshop, digitization studio and full complement of conservation boxes designed to protect the most vulnerable manuscripts of the monastery. About 2000 manuscripts should be stored in boxes.

Retrieved from "https://en.everybodywiki.com/index.php?title=Orthodox_Church_of_Mount_Sinai&oldid=818830"
Categories:
Hidden categories:
This page was last edited on 18 June 2020, at 12:30.
This page has been accessed 176 times.
Content is available under License CC BY-SA 3.0 unless otherwise noted.
Privacy policy
About EverybodyWiki Bios & Wiki
Disclaimers