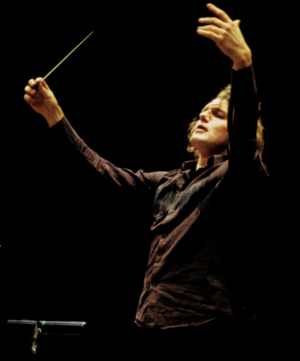 Oswald Sallaberger (born 3 July 1966) is an Austrian conductor, and the founder of the Rouen Philharmonic Orchestra.

Born in Innsbruck (Tyrol), after being a student of Végh, Bernstein, Boulez, Abbado and Zehetmair,[1] Sallaberger began conducting chamber orchestras at the age of 17 (at Carnegie Hall in New York, 1987,[2] among others). He continued his studies under the direction of Gielen at the Mozarteum University Salzburg.[1]

Sallaberger, violinist and chamber musician, is now a conductor for the great lyrical and symphonic repertoire. He was the founder of the Rouen Philharmonic Orchestra, of which he was Music Director from 1998 to June 2010.[1][3][4]

He collaborates intensively with great composers of our time such as Kurtág, Lachenmann, Eötvös, Dutilleux and Ligeti.[2]

He has also worked with more specialized ensembles (the Ensemble Modern, the Ensemble intercontemporain etc.).[5]

Retrieved from "https://en.everybodywiki.com/index.php?title=Oswald_Sallaberger&oldid=1740424"
Category:
Hidden categories:
This page was last edited on 25 May 2021, at 00:02.
This page has been accessed 464 times.
Content is available under License CC BY-SA 3.0 unless otherwise noted.
Privacy policy
About EverybodyWiki Bios & Wiki
Disclaimers