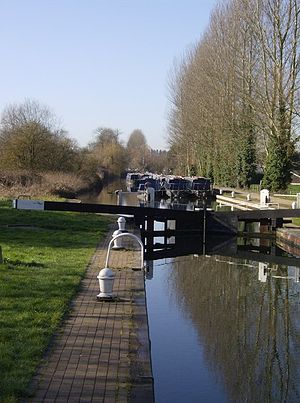 Padworth Lock is one of the many locks rebuilt from scratch during the restoration of this canal.

Padworth Lock is a lock on the Kennet and Avon Canal, at Aldermaston Wharf in the civil parish of Padworth in the English county of Berkshire.

Padworth Lock was built between 1718 and 1723 under the supervision of the engineer John Hore of Newbury, and was originally a turf-sided lock. The lock has a rise/fall of 5 ft 1 in (1.55 m).,[1] and was totally rebuilt as a brick lock between 1982 and 1984. The canal is administered by the Canal & River Trust.

Retrieved from "https://en.everybodywiki.com/index.php?title=Padworth_Lock&oldid=1489218"
Categories:
Hidden categories:
This page was last edited on 19 March 2021, at 23:20.
This page has been accessed 109 times.
Content is available under License CC BY-SA 3.0 unless otherwise noted.
Privacy policy
About EverybodyWiki Bios & Wiki
Disclaimers