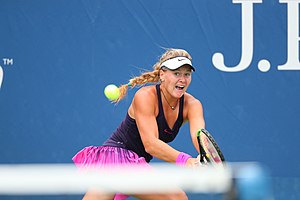 Peyton Stearns at the 2018 US Open

Stearns is currently ranked No.753 in the world for singles and has reached a career high singles ranking of 731. She made a debut at the $15,000 in Naples, Florida making the semi finals.[2]

Stearns reached a career high of No.49 in ITF Juniors. She made a debut in 2018 at the Australian Open, Roland Garros, Wimbledon, and US Open. In 2017 her and Dalayna Hewitt won two major junior tournaments in Mexico.[3]