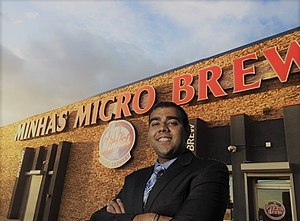 Ravinder Minhas outside of Minhas Micro Brewery in Calgary

Ravinder Minhas (Born January 27, 1982) is a Canadian entrepreneur. He is co-founder of Minhas Breweries & Distillery; with breweries in Monroe, Wisconsin and Calgary Alberta.[1] with a Calgary based distillery opening soon. [2] He has received numerous awards, according to Bloomberg.com, they include ” Calgary Inc.'s Top 40 under 40, JCI's (Junior Chamber International) Outstanding Young Calgarian: Accomplishment Award, Alberta Centennial Medallion (2006), FASD Fetal Alcohol Spectrum Disorder education and prevention 2004-2017, service award recipient 2006 and CIBC Student Entrepreneur of the Year (2005)” [3] University of Calgary named him “Graduate of the Decade in 2007” [4] for his achievements. He has shown an avid interest in Calgary Stampede and has been on the council since 2012. [5] He is CEO and Executive Producer of Spotlight Production, a Calgary based media production company. [6]

Born and raised in Calgary, Alberta, he attended the university of Calgary’s Engineering program and graduated in 2005 [7] Avid in the promotion of drinking responsibly; his company was the first, in Canada, to voluntarily put management warning labels on his line of products reading “MANAGEMENT WARNING: Please do not drink and drive – ever. Expectant mothers should avoid drinking alcoholic products. Enjoy this product responsibly – Respect yourself and others“. [8] Ravinder is married to Jyoti Auluck and has one daughter. They live in Calgary, AB. 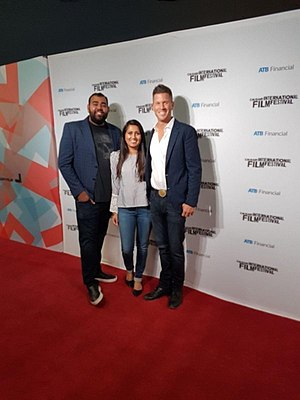 In 1999, while still attending University of Calgary’s Oil and Gas Engineering and Petroleum Engineering programs[9] Ravinder and his sister saw a niche in the liquor market that was not being explored: to “design, create recipes, and market high quality premium liquor and sell them at a discounted price” [10] Using the proceeds from the sale of Manjit’s Toyota Rav 4 of $10,000, Ravinder and his sister were able to start producing and marketing their own beers; through the Minnesota Brewery in Minneapolis, MN, and City Brewery, Lacrosse, WI, before purchasing, in 2007, the historic Joseph Huber Brewing Company located in Monroe, Wisconsin to bottle their product. After which he changed the brewery’s name to Minhas Craft Brewing. [11]

Today, Minhas Craft Brewery is the 10th largest craft brewery in the United States and they sell their products in “40 states in USA, almost all provinces in Canada as well as Brazil, Chile, China, Colombia, Costa Rica, England, Finland, Guam, Japan, Malaysia, Mexico, Norway, Panama and Trinidad and many other countries”[12] In addition to producing such brands as Boxer Lager, Lazy Mutt Ale and Huber Bock, the Minhas Craft Brewery has also produced for other brewers and produces private label beers and spirits for retailers such as Costco, Trader Joes, Lidl, Tesco, Liqour Barn and Walgreens. [13] Minhas big break in the liquor market in Canada came when a shortage, of Tequila, which enabled them to secure a supply of Tequila at a good price and use it gain a large market share.[14] Ravinder opened Minhas Micro Brewery in 2012, using the same format of his Brewery in Monroe, he offers tours, restaurant, taproom and gift shop. In the beginning of 2018 he announced that the brewery would be expanding to include as distillery. [15] Combined, the Minhas Breweries & Distillery is a group of companies with reported revenue of $155 million in 2014.[16]

In 2002, Molson Brewery claiming the label for the Mountain Crest brand copied the label of the Molson Pilsner brand sued Mountain Crest Brewing Company. The dispute was settled out of court.[17]

While attempting to enter the Ontario beer market, in 2005, an Ontario Provincial Police investigation[18] slowed their entry into the Largest Canadian Liquor Market. The investigation was dropped, in 2009 and Boxer Lager was listed in Ontario's Beer Store chain. [19]