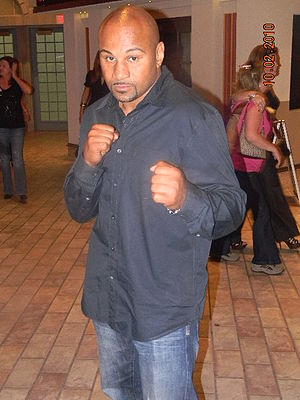 Ray Oliveira at a fight card at Foxwoods, 2010

"Sucra" Ray Oliveira (born October 6, 1968) in New Bedford, Massachusetts. Oliveira's last fight took place at Hampton Beach Casino in Hampton Beach, NH on July 8th, 2005. He began experiencing serious pains at the base of his skull midway through his fight against Emanuel Augustus. The referee called the bout after noticing that Augustus was avoiding throwing punches to Oliveira's head..

Oliveira endured a fifteen-year professional career in the ring, with notable victories over Vince Phillips and Vivian Harris. He had never been stopped prior to his defeat to Ricky Hatton in a WBU light welterweight title challenge in 2004 Hatton out slugged Oliveira and in round 10 Oliveira was hurt to the ear but Hatton kept punching putting Oliveira down and he kept down giving Hatton the 10th-round KO. Oliveira was supposed to come back and fight Joey Spina at Foxwoods on October 2, 2010, but due to questions with one of his medical exams, the bout was not approved by the Foxwoods Athletic Commission, putting Oliveira's comeback on hold.

Share
Retrieved from "https://en.everybodywiki.com/index.php?title=Ray_Oliveira&oldid=2254231"
Categories:
Hidden categories:
This page was last edited on 16 January 2022, at 14:07.
Content is available under License CC BY-SA 3.0 unless otherwise noted.
This page has been accessed 44 times.
Privacy policy
About EverybodyWiki Bios & Wiki
Disclaimers