Razaq Juwon Lawal (born 22 October 1979) is a Nigerian born entrepreneur. He is the founder and CEO of Africent Group. His company, ABD Fuels was awarded the 2012 Marine Logistics Provider of the Year by the Young Achievers Award.[1]

Razaq Lawal is from Kogi State, Nigeria. He grew up in Lagos. He started business at a young age managing his father’s palm oil business. He holds a B.Sc in Business Administration and an MBA in Business Administration and Management from Ambrose Alli University, Ekpoma, Edo State.[2] He also received professional executive training in agribusiness from Harvard Business School.

Razaq Juwon Lawal is a serial entrepreneur. His father was an industrialist who ran a palm oil extraction business. He began his business career at a young age managing his father’s palm oil business. His research into the palm oil business led him into oil, marine and agriculture.[3]

In 2005, he began consulting in oil marketing and training, and in 2007 he established Stevepel Energy Resources Limited, an oil and gas outfit.[4]

By 2009, he delved into marine logistics services, floating S. T. & L. Bunkers Ltd which later transformed into ABD Fuels Plc. ABD Fuels, a corporate member of the International Bunker Industry Association (IBIA) was a bunkering firm that marketed and supplied marine fuels to ships in port and at sea along the coast of West Africa. It began producing lubricants for automotive and industrial use in 2010. ABD Fuels is the firm that has metamorphosed into S8 Contractors.[5]

Juwon Lawal’s entrepreneurial drive is evident by his attendance at various local and international business meetings. He is a regular attendee of the International Petroleum Week (IP) Week; a key event in the oil and gas industry where senior executives from all over the world gather in London for a round-table trade discourse.[6]

He was also at the 2018 edition of The Africa Forum, an international landmark event aimed at promoting greater economic integration through increased investment flows into Africa, alongside African leaders and business experts and entrepreneurs which included the president of Egypt, Abdel Fattah Al-Sisi; Alhaji Samad Rabiu of BUA Group; Mr. Akinwunmi Adesina, President of Africa Development Bank, and a lot of others.[7][8]

As a zealous entrepreneur, Lawal is quoted by The Sun newspaper to have said, “I strongly believe in my country and that things will surely get better. I am very passionate about this country and I strongly believe in Nigeria and Africa at large. Economic growth is a challenge across the globe, but the country will get there one day looking at the growth of small and medium industries, sales, market hub, you will agree that small thriving businesses are the true reflection of a country’s economic wellbeing.”[9][10]

Lawal's ABD Fuels was the 2012 Young Achievers Awards winner for Marine Logistics Provider of the Year. In 2013, he emerged winner of the Young Entrepreneur of the Year by Global Excellence Recognition Awards.

In 2020, he was named a UN Eminent Peace Ambassador and [11][12]Businessman of the Year by the International Association of World Peace Advocates and the Global Excellence Awards, respectively.

In July 2020, Razaq Juwon Lawal was accepted into the Forbes Business Council, the foremost growth and networking organization for successful business owners and leaders worldwide. Lawal was vetted and selected by a review committee based on the depth and diversity of his experience. Criteria for acceptance include a track record of successfully impacting business growth metrics, as well as personal and professional achievements and honours.

The Commonwealth Entrepreneurs Club appointed Razaq Juwon Lawal as Global Ambassador and Member of the Club in March 2021. The Club is an international network of experts in business and government with the aim of driving economic and social outcomes through collaboration to create jobs and alleviate poverty. The core mandate of the Club is to facilitate and promote international trade by way of shared advice, business networking events, conferences, and seminars. The Commonwealth Entrepreneurs Club is also a global business membership organization that provides a unique business networking and trade development platform for small to medium-sized businesses. The Club business members span the world across 54 countries, worldwide. 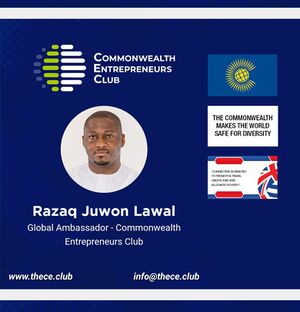 Share
Retrieved from "https://en.everybodywiki.com/index.php?title=Razaq_Juwon_Lawal&oldid=1810373"
Categories:
Hidden categories:
This page was last edited on 18 July 2021, at 13:16.
Content is available under License CC BY-SA 3.0 unless otherwise noted.
This page has been accessed 3,544 times.
Privacy policy
About EverybodyWiki Bios & Wiki
Disclaimers