Rhizome Lee (リゾーム・リー) born in Wakayama, Japan in 1948 is a Japanese butoh dancer, philosopher, writer, editor, dance anthropologist and “midwife”. He trained in various forms of contemporary dance throughout the ’80s that led him to indulge himself in his own path in butoh he named "subbody resonance butoh". Since 2002 he has settled in Dharamshala, India and founded the Subbody Resonance Butoh Himalaya School. The school has been so far the only butoh school in the world offering continuous training program based on classical Ankoku butoh after the teachings of the originator Tatsumi Hijikata. 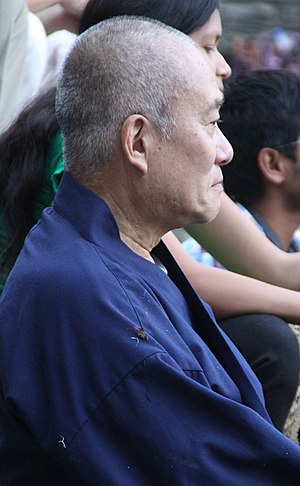 He has encounter Tatsumi Hijikata's Butoh performance at Kyoto, 1972. And it changed his life completely. Tatsumi Hijikata is the founder of Butoh. He created the path to all butoh people by reconnecting the body to its origin, and naming his dance Butoh (Buto, 舞踏). Rhizome Lee dedicated his life to revive the work of Hijikata. Has been studying his unique Butoh-fu notation system, and translating his work into English created the base for the subbody butoh method. Rhizome Lee studied butoh from, among others, Motofuji Akiko, the wife of Hijikata, and Kan Katsura in Kyoto. And various forms of movement practice between 1980 and 1997. Also learned Tao Shiatsu method from Ryokyu Endo, who was the originator of Tao Shiatsu. From 1998 for five years he has been touring worldwide as a professional butoh dancer with the performance troupe “Dance Rhizome”, and since has been giving workshops in more than 20 countries (Japan, Thailand, India, Indonesia, Hungary, France, Spain, Holland, Belgium, Austria, Romania, Slovakia, Yugoslavia, USA, Venezuela, etc.). In 2002 he settled in Dharamshala, India where after three years he founded the butoh school “Subbody Resonance Butoh Himalaya”, and welcomes students and practitioners from all over the globe.

He found the "subbody" during the research of darkness of body (subconscious body). When we stop daily conscious mind through the original conditioning method (breathing, vibrating, swaying, stretching and so on), and listen to the subconscious, the body and subconscious are not separated like in the daily world, it becomes oneness. He named the subconscious body as "subbody". When we meet the own subbody, it guides to open the infinite creativity, originality and resonance ability of subconscious and Life. He integrated the subbody method and Tatsumi Hijikata's original Butoh method through the investigation in Tatsumi Hijikata’s poetic Butoh notations (especially "Quiet House" and "Sick Dancing Princess"). The darkness of the body for Rhizome Lee is the Jungian unconscious, including collective unconsciousness. This non-dual space-time of the mind-body is where the seeking for butoh starts. Another important pillar of Rhizome Lee’s approach is the aim to deconstruct what he calls “the hierarchy of teaching system”. He considers during classes all participants – including himself – a midwife, a term with which he signifies that the practice can change and come alive from a collective shared presence. The first book of Rhizome Lee, "Behind the Mirror -A Butoh Manual for Students) has become an essential textbook since it’s published in 2012. The latest book "The Butoh" published in 2018 is the new textbook that is an integration of subbody butoh method and Hijikata Butoh method as one.