He studied law and real estate. He holds a law degree and a bachelor's degree in real estate management. He developed an interest for business and more particular for investment at his 22 years old. He decided to educate himself by reading books on investment, financial liberty and financial success, including books by Robert Kiyosaki, Benjamin Graham and Warren Buffett.

He began is investor career in January 2020 just before the massive market collapse due to the COVID-19. He makes his first investment in the French company Air liquide. After this first investment he takes advantage of the fall of stocks markets in spring to buy shares massively in the holding company of his mentor Warren Buffett, Berkshire Hathaway and in the American real estate investment trust Store Capital.

Like his mentor Warren Buffett, he is accustomed to concentrating his investments in undervalued companies with strong long-term growth potential. He avoids investing in high-tech companies not because they are less attractive in themselves, but because he prefers to invest in sectors he understands. He is a proponent of value investing.

As of November 2020, he only holds Berkshire Hathaway and Store Capital stakes.

On 11 December 2020, the day after the IPO of Airbnb and Doordash, he declared:

The markets are reliving the same situation as in 1999 before the bursting of the Internet bubble where some companies saw their share prices increase by more than 100% in a single session. Many shares are largely overvalued, notably Tesla whose market value is 850% higher than its book value and its market capitalisation is 1250x higher than its profits. The 113% increase in Airbnb's share price in a single session brought the value of the rental housing platform to more than $100 billion, more than the combined market capitalisation of the major hotel chains Marriott, Hilton, Intercontinental and Hyatt, which amounts to $90 billion.

The situation is becoming worrying. First of all we have the Capitol takeover which is similar to a coup d'état. Then we have Elon Musk who becomes the richest man in the world while Tesla only sells 500,000 cars a year. Finally we have Bitcoin which has exceeded 40,000 dollars and all this while the health crisis is still present and the economy is still in difficulty. The risk of a stock market crisis is more and more important.

Its stock market investment strategy is based on a certain number of principles, including :

When he invest he follows the technique developed by Benjamin Graham in his book The Smart Investor. Graham developed the notion of "margin of safety" (the difference between the real value of a company and its stock market value). Like Graham and his mentor Buffett, he prefers to buy when the stock market value is significantly lower than the company's real value.

Concentrating first of all its investments in French stocks (Air Liquide, Airbus, Safran), he will gradually detach itself from these stocks to invest in American companies which, according to him in, offer better long-term growth prospects and higher returns than French or European stocks.

As far as his personal life is concerned, he is very thrifty. He spends very little money on recreation or consumer goods. He uses his car very little, preferring public transport mainly the train and he travels very little by plane.

He play music and make tennis. He his also a great collector passionate of minerals and fossils. In winter he likes to ski.

He lives in France in a mansion built by his grandfather in 1960s[1]. The 4811 square-foot (447 m²) mansion has five bedrooms and three bathrooms. The house that uses its natural surroundings to reduce heat loss has an indoor temperature control system that automatically adjusts itself according to the outdoor temperature by a geothermal system.

He says very little about his personal opinions but describes himself as a Liberal-Conservative. He defends conservative concerns in particular for established traditions, respect for authority, public order, security, national identity, religious heritage, the family, but with liberal ideas on the economic level (tax cuts, privatisation of public services, maximum company tax at 15%...).

Title, coat of arms and motto[edit]

He descends on his father's side from a German noble family from Bavaria.

As the son of Herr Stephan he bears the title of Jungherr Stephan (young herr) traditionally attributed to the heir apparent.

At the time of his father's death he will automatically become Herr Stephan with the noble qualification of Landmann (equivalent of esquire).

Coat of arms and motto[edit] 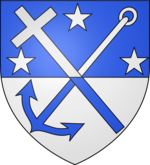 Escutcheon : Per fess Azure and Argent, a Latin cross and an anchor in saltire surmounted by three misordered silver stars in chief, all counterchanged

Retrieved from "https://en.everybodywiki.com/index.php?title=Roman_Stephan&oldid=1411481"
Hidden categories:
This page was last edited on 25 February 2021, at 15:52.
This page has been accessed 362 times.
Content is available under License CC BY-SA 3.0 unless otherwise noted.
Privacy policy
About EverybodyWiki Bios & Wiki
Disclaimers
Mobile view