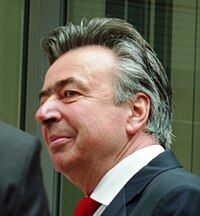 Ruf Automobile GmbH is a German car manufacturer that manufactures and engineers original vehicles using unmarked Porsche chassis, specifically known as bodies in white. The cars are built from the ground up as completely new cars, using these bare chassis, and assembled using Ruf-made parts and materials (e.g. BTR, CTR2, RT12), instead of badge engineering or disassembly of existing cars. This means the company is officially recognized as a manufacturer by the German government. As such, all Ruf models have certified Ruf VIN and serial numbers, and are recognized as production models, rather than modified Porsches. Ruf is historically known for its record breaking 211 mph CTR, and is the largest, most renowned company to make Porsche performance enhancements. Though primarily a manufacturer, Ruf has also made a name for itself operating as a car tuner, a specialist in customer-requested Porsche-to-Ruf conversions (e.g. Turbo R conversions), and a restorer of classic Porsche and Ruf models. Ruf carries out service and crash repair, as well.

Ruf Automobile GmbH operated as a car manufacturer and a car tuner at the same time for some models. For example the famous CTR (1987–1996) was manufactured only 29 times from bodies in white, at the same time about 20-30 cars were built from customers' cars. It is possible to distinguish between manufactured cars and tuned cars by looking at the VIN (vehicle identification number). A RUF VIN starts with "W09" whilst a Porsche VIN starts with "WP".

The company was founded in 1939 in Pfaffenhausen, Germany as "Auto Ruf" by Alois Ruf Sr. as a service garage and was eventually expanded to include a full-service gas station in 1949. Ruf began experimenting with vehicle designs of his own in the late 1940s, and in 1955 designed and built a tour bus, which he marketed around Germany. The positive response it received led to Ruf expanding his business again by starting his own separately owned bus company.

Alois Sr.'s involvement in the car industry had a distinct effect on his son, Alois Ruf Jr., who became a sports car enthusiast. In 1960, Alois Jr. began servicing and restoring Porsche automobiles out of his father's garage. Following Alois Sr's. death in 1974, 24-year-old Alois Jr. took control of the business and focused on his passion: Porsche vehicles, and especially the 911. A year later in 1975, the first Ruf-enhanced Porsche came to life.

In the years since, the company has made a major mark on the automotive world by producing exceptionally powerful and exclusive Porsche-based production models. The 1987 Ruf CTR achieved a top speed of 339 km/h (211 mph) in April 1987 and set the record as the world's fastest production car for its time; in 1988 it even reached 342 km/h (213 mph). Its successor, the 1995 Ruf CTR2, had clocked a top speed of 350 km/h (217 mph), making it for a brief moment the fastest road-legal production car in the world in the mid '90s, until the McLaren F1 broke the record in 1998 at 241 mph, thus making the CTR2 the second-fastest production car of the decade. However, the CTR2 cost only a fraction of the price of the F1.[2][3][4]

In April 2007, Ruf released the new CTR3 to celebrate the company's new plant in Bahrain, and as a 20th anniversary celebration of the original CTR and successor to the CTR2. At the 2010 Geneva Motor Show, Ruf also showcased the RGT-8, the first production V8-powered 911 in history.

Please be aware that this table is still incomplete.

The eRuf Model A is an all-electric sports car made by Ruf Automobile. The car is powered by a UQM Technologies[17] propulsion system (a UQM PowerPhase 150). The car has a top speed of 225 km/h (140 mph)[18] and is capable of producing 150 kW (204 PS; 201 hp) and 649 N⋅m (479 lb⋅ft) of torque.[19] Estimated range per charge is 250–320 km (155–199 mi), depending on performance level, using iron-phosphate, lithium-ion batteries built by Axeon of Great Britain.[20] The power and torque produced by the 3-phase motor can be used to recover almost as much power as it can put out. During coasting the engine works as a generator producing electricity to charge the batteries.[21] Ruf announced that it hoped to begin production of the eRuf in the autumn of 2009.[22] This did not happen, and at the 2009 Geneva Motor Show, Ruf announced a new model, the eRUF Greenster, with limited production planned to commence at the end of 2010.[23]

Ruf models have historically appeared in many large racing video game franchises as a substitute for the Porsche models they are based on due to Porsche's exclusive licensing in video games.[24] Starting with the release of Need for Speed: Porsche Unleashed in 2000, Porsche entered an exclusivity deal with Electronic Arts (EA) which meant that Porsche models would only appear in EA's titles, most notably the Need for Speed franchise and the Real Racing series. The only exceptions to this were a number of games in the Forza and Project Gotham Racing series due to sub licensing arrangements made between EA and their games' respective developers, Turn 10 Studios and Bizarre Creations. Other large video game franchises, however, including Gran Turismo, Project CARS, Assetto Corsa, Asphalt, Test Drive, The Crew, Driver: San Francisco, Driveclub and a few Forza games used Ruf models in place of Porsche. This circumvented Porsche's licensing as Ruf is considered by the German government to be a full fledged manufacturer, and as such Ruf models have unique VINs.[25] The exclusivity deal between Porsche and EA ended in 2016, leading many franchises to stop featuring Ruf models in favor of Porsche.[26]

Retrieved from "https://en.everybodywiki.com/index.php?title=Ruf_Automobile&oldid=1686759"
Categories:
Hidden categories:
This page was last edited on 6 May 2021, at 05:40.
This page has been accessed 57 times.
Content is available under License CC BY-SA 3.0 unless otherwise noted.
Privacy policy
About EverybodyWiki Bios & Wiki
Disclaimers