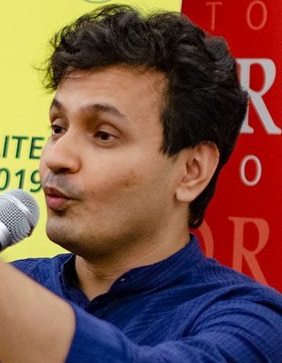 Saikat Majumdar is an Indian novelist and academic. He was educated in India and the United States, where he studied literature and creative writing. He is the author of two novels, Silverfish (2007)[1] and The Firebird (2015)[2], a book of literary criticism, Prose of the World (2013)[3] and a book of nonfiction, College: Pathways of Possibility (2018)[4]. He taught in Canada and the US for several years and is now Professor of English and Creative Writing at Ashoka University.

Majumdar was born in Kolkata and grew up there[5]. He read English literature in St. Xavier’s College and Jadavpur University and went on to study creative writing and literature in the US, receiving his doctorate in English from Rutgers University.

He taught English and world literature at McMaster University and Stanford University for several years before returning to Delhi to teach at Ashoka University and head its Creative Writing Department[6].

He was a Fellow at the Suzy Newhouse Center for the Humanities at Wellesley College in 2017-18[7].

Majumdar’s first novel, Silverfish (2007) was set in 1980’s Calcutta and 19th century Bengal[8]. His second novel, The Firebird (2015), tells the story of a young boy’s fear and fascination with his mother’s life as a stage actress, and his destructive relationship with the art form of theatre[9]. The Firebird was a finalist for the Atta Galatta/Bangalore Literature Festival Fiction Prize in 2015 and the Mumbai Film Festival Word-to-Screen Market; it was also selected as one of the Telegraph’s Best Books of 2015[10]. It appeared in the US in 2017 under the title Play House[11].

His third novel, The Scent of God, is a love story between two teenage boys in a monastic boarding school. It will be published in March 2019.

Majumdar is also the author of a book of literary criticism, Prose of the World: Modernism and the Banality of Empire (2013), which was a finalist for the Modernist Studies Association’s Best Book Award in 2014, and College: Pathways of Possibility (2018), a general nonfiction on liberal arts and sciences education in India[12]. A collection of essays, The Critic as Amateur, co-edited with Aarthi Vadde from Duke University, is forthcoming in 2019.

Fellowship, the Suzy Newhouse Center for the Humanities at Wellesley College, 2017-18.

Prose of the World a finalist for the Modernist Studies Association’s Best Book Award, 2014.

“Unlearning to write: on loving and hating creative writing workshops” (The Hindu, April 29, 2018)

“The provincial polymath: the curious cosmopolitanism of Nirad C. Chaudhuri,” (PMLA, May 2015)

“The ashes of pleasure: how the curtains came down on Calcutta’s professional theatre.” (Caravan, September 2014)

Literature as Sin: The UEA Seminar in Literary Activism

Writing Across Borders: The University of Chicago Symposium on Creative Writing

Retrieved from "https://en.everybodywiki.com/index.php?title=Saikat_Majumdar&oldid=956105"
Categories:
Hidden category:
This page was last edited on 16 August 2020, at 00:44.
This page has been accessed 737 times.
Content is available under License CC BY-SA 3.0 unless otherwise noted.
Privacy policy
About EverybodyWiki Bios & Wiki
Disclaimers
Mobile view