Standing on the original site where Juan de Salcedo together with the Augustinian priest erected the wooden cross when Biñan was founded and converted to Christianity. The Augustinian Priests were the first to administer the Parochial district of Biñan up to 1637, from whom the Dominican Fathers took over. The first structure was started in 1690 and was finished in 1694.At the end of the 18th Century, the Secular Priests took charge the administration of the Parish. The first appointed Parish Priest of this Parish was Father Jose Monroy in 1757, a Filipino and Doctrate in Sacred Theology.

A big fire occurred in Biñan in 1809, and on February 14, 1814. The whole town also experienced a rain of ashes due to the eruption of the Taal Volcano. In 1820 a cholera epidemic caused by the death of many people. An earthquake which was felt throughout the Archipelago occurred on June 3,1826, destroying several buildings in town including the Parish Church and the Convent. The earthquake of 1862 partially destroyed the church and a lightning struck the belfry on Aug. 17, 1870. Another earthquake occurred on June 20 and 22,1880, causing again the destruction of the Church and the Casa Tribunal.

A new structure was built in 1892 which was again partially destroyed by a typhoon on Sept. 21, 1905. That was initiated by Father Rafael Pajol, a Dominican Priest and his assistant Father Ulpiano harrera on 1892. But on May 28, 1898, three days after Father Patronilio Aguado left, the town revolted against the Spaniards. It was only on May 13, 1929 when the construction of the present Belfry was finished.

The Remodeling of the Old Church was started on March 1953, and Four(4) Years thereafter anew church was almost completed. But on February 1968, however, a fire destroyed the newly remodeled Church and the Old Convent. Through the leadership of Mayor Jesus M. Garcia, the Church was reconstructed.

The present structure was the result of the renovation started by then Mayor Jesus Garcia on Jan. 2, 1953. The church was completed, after several modifications of the design in 1963 during the term of Rev. Fr. Cabrera. On Feb. 5, 1968 the church was destroyed by a fire. Another rehabilitation ensued till it was finished on Jan. 11, 1970 placing the altar on the side and the pews on a semi -circular manner. Several years ago, the church altar was moved back to its original structure as it is now.

During the term of Msgr. Caguicla, he initiated the various constructions within the church, like doors, the altar, the marmol-stone on which the Previous altar was built, the lights and Pews. They also put Fence around the boundaries of the Parish. When Msgr. Caguicla died, he was succeeded by Rev. Father Emilio Palma and he started to reconstruct the rectory, Mortuary and Adoration Chapel and some other improvements inside and outside the Parish Church. It was also during the time of Rev. Fr. Palma that the Municipal Government and the Parish made a deed of exchange in which the outer part owned by the Municipality is exchanged of the nearby site owned by the Parish. Other minor construction were continued by the late Father Pedro Silva. When Fr. Silva reached the age of retirement, he was succeeded by Msgr. Fidel Menorca through the aid of some generous parishioners. The Belfry also underwent improvement. Also during the time of Msgr. Taguilaso, Msgr. Carillo, and Father Olaso. Many improvements have been made the Parish church and the parish convent during the term of Rev. Fr. Luis Tolentino and Rev. Fr. Reynaldo Hayag.

Etymology of the word "Biñan"[edit]

The fertile soil of Binyang – this is how local would pronounced the name . The town’s  patron is San Isidro de Labrador/ Saint Isidore of Labrador –   saint of  the farmers or peasants,  For a time it was called Pueblo de San Isidro de Labrador when the town was still under Tabuco present day (Cabuyao) Laguna.Puto

During the Spanish regime, the present barrios of Loma and Zapote of Biñan, Laguna, were separated. With coconut shells as implements the people of these two barrios danced the Maglalatik, or Magbabao, a war dance depicting a fight between the Moros and the Christians over the latik (residue left after the coconut milk has been boiled).

The first two parts of the dance, the Palipasan and the Baligtaran show the heated encounter between the two groups. The last two parts, the Paseo and the Sayaw Escaramusas how the reconciliation between the two groups. According to the legend the Moros came out victorious, thus getting the coveted latik. The Christians, not contented with the result of the war, sent an envoy to the Moros to offer peace and to baptize them.

The best Maglalatik dancers are found in Zapote. In the daytime during the town fiesta of Biñan, the Maglalatik dancers go from house to house performing this dance for money or a gift. In the evening they dance Maglalatik in the religious procession as it moves along the streets. They perform the dance as an offering to the patron saint of the farmers, San Isidro de Labrador.[2]

Inside and Outside of the Church[edit] 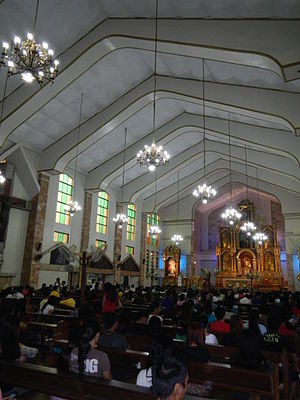 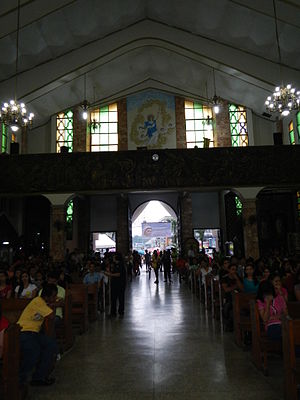 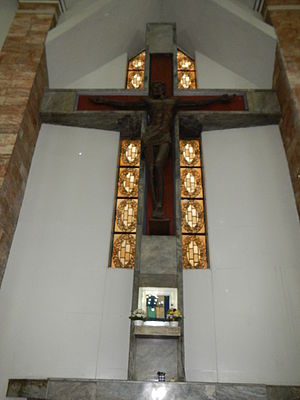 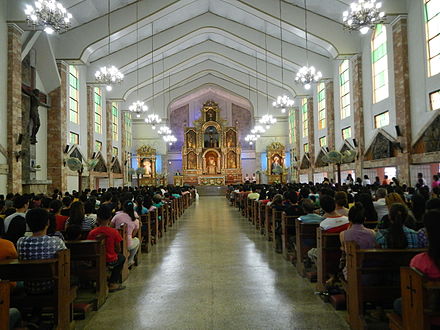 Retrieved from "https://en.everybodywiki.com/index.php?title=San_Isidro_Labrador_Parish_Biñan&oldid=956803"
Hidden category:
This page was last edited on 16 August 2020, at 06:10.
This page has been accessed 2,866 times.
Content is available under License CC BY-SA 3.0 unless otherwise noted.
Privacy policy
About EverybodyWiki Bios & Wiki
Disclaimers