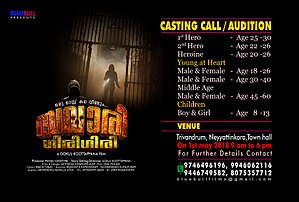 Savaari giri giri is a 2018 Indian Malayalam-language-comic-romantic-horror film directed by Gokul koottappana and starring new faces in the title roles. It was produced by Manju gayathri through Blue bull Films. The story and editing of the film was also done by Gokul koottappana. Sathya das kanjiramkulam and sreekanth rameshwaram are the scriptwriters of the movie.The film also stars Bheeman Raghu, Noby Marcose, ullas panthalam and many others.The film graphics and poster designing were done by Arun manoj. The film score and soundtrack were composed by Dinu mohan, while cinematography was handled by Rajesh thejas.

You have to Sign in or create an account to comment this article !<comment-streams/>
Retrieved from "https://en.everybodywiki.com/index.php?title=Savaari_giri_giri&oldid=957699"
Categories:
Hidden categories:
This page was last edited on 16 August 2020, at 09:01.
This page has been accessed 179 times.
Content is available under License CC BY-SA 3.0 unless otherwise noted.
Privacy policy
About EverybodyWiki Bios & Wiki
Disclaimers
Mobile view