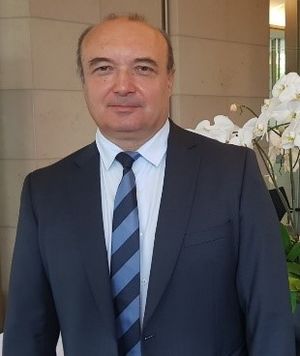 Sergei Eremenko (Sergei Yurievich Eremenko, born October 6, 1963, in Kharkiv, Ukraine) is an Australian-Ukrainian scientist and professor. He has authored two books[1][2](at the age of 27 and 28) and over 30 research papers.[3][4][5] At the age of 31, Eremenko was one of the youngest professors in the world. Being a pupil of Academician Rvachev V.L.,[6][7] leading research fellow at Institute for Problems in Machinery of Ukrainian National Academy of Sciences and professor of Kharkiv National University of Construction and Architecture, he was working in applied mathematics’ fields of finite element methods[1][2][8][9][10] mechanics of composite materials and constructions[1][2][11][10] for engineering, military and space projects, as well as mathematical theories of R-functions[1][2][11][12][9][10][13] and non-Archimedean calculi.[3][14]

After migrating to Australia in 1997, he has expanded scientific and applied research to the theory of solitons,[15][16] models of spacetime and matter quantization based on AStrings[17][18][16] and atomic functions,[15][16] nonlinear solitonic models of financial markets,[19] as well as machine learning and artificial intelligence.[18]

Eremenko graduated in 1986 with a degree in Applied Mathematics from the National Aerospace University, Kharkiv Aviation Institute in Ukraine[20][21][22][23] and then completed his Ph.D. at the age of 24.[24][25] He got his Doctor of Engineering degree in mathematical simulation and mechanical engineering after defending the thesis at the age of 29.[26][27] Sergei belongs to the scientific school of Academician Rvachev V.L.(Владимир Логвинович Рвачёв), a mentor of his second doctoral thesis. He also completed Machine Learning courses at Stanford University and Microsoft in 2017.

Eremenko began his career in 1986, after graduating from the Kharkiv Aviation Institute in Ukraine. Being admitted to post-graduate courses, he started working on engineering and space projects with S.P. Korolev Rocket and Space Corporation Energia, Machine-Building Plant “Yuzhmash”, Kamov Helicopter Plant, Nikolaev Ship Building Plants, NPO “Turboatom”, a few atomic power stations and heating systems plants. He has developed computational models and software packages[1][2] for calculation of static and dynamic stress and thermal fields in engineering and space constructions based on variations of finite element methods – structural finite element[1][2][11][9][10] and equilibrium boundary element methods.[1][12] This led to a Ph.D. thesis in 1988, a few papers[11][10] as well as first[1] and second[2] books at the age of 27 and 28. In 1984, Sergei met his teacher and co-author[14][10] Academician Rvachev V.L. who later has become the mentor of his second thesis for Doctor of Engineering degree in mathematical simulation and mechanical engineering defended at the age of 29. Apart from applied research, Sergei has been working in the mathematical fields of non-Archimedean calculi introducing Combined Non-Archimedean Calculi theory.[3][14] He has become the Leading Research Fellow at Institute for Problems in Machinery of Ukrainian National Academy of Sciences.

Eremenko's teaching career started in 1988 as an assistant, docent to professor of Kharkiv National University of Construction and Architecture, with the academic title of Professor awarded in 1995 by the Ministry of Education of Ukraine.

In his books, theses, and papers, Sergei Eremenko has introduced the following methods, concepts, and terms:

-       financial market solitons[19] as statistical, nonlinear dislocation effects between highly correlated markets based on the generalization of Frenkel-Kontorova solitonic model;

-       atomic string functions (AStrings)[15][18][16] as integrals and compounding branches of atomic functions, with applications to spacetime and matter quantization;

-       atomic solitons[15][16]  as a new class of mathematical topological solitons based on atomic functions and their AStrings generalizations;

Sergei Eremenko was born to Maria and Yuri. He is married to Natalie Eremenko and has two sons Alex and Aleksey.

Retrieved from "https://en.everybodywiki.com/index.php?title=Sergei_Eremenko_(Scientist)&oldid=532932"
Hidden categories:
This page was last edited on 17 September 2019, at 13:41.
Content is available under License CC BY-SA 3.0 unless otherwise noted.
This page has been accessed 651 times.
Privacy policy
About EverybodyWiki Bios & Wiki
Disclaimers