"Someone Else" is a song by American recording artist Miley Cyrus for her fourth studio album Bangerz (2013). Cyrus collaborated with Mike Will Made It, MoZella, P-Nasty, Don Skipper III and Rock City during the songwriting process, while production was handled by Mike Will Made It and P-Nasty. "Someone Else" is influenced by electronic dance music (EDM), and additionally incorporates elements of synthpop; its lyrics reference Cyrus' evolving public image during production of the parent record.

Contemporary music critics were divided in their opinions of "Someone Else", feeling that its generic production overshadowed its lyrical meaning and Cyrus' vocal performance. Despite not having been released as a single, it peaked at number 93 on the U.S. Billboard Hot 100. Cyrus has also performed the track during her ongoing Bangerz Tour, where she was notably suspended mid-air on a large hot dog.

"Someone Else" reportedly referred to Cyrus' relationship with her former fiancé Liam Hemsworth (pictured).

During an interview on The Ellen DeGeneres Show in October 2013, host Ellen DeGeneres asked Cyrus if Bangerz was inspired by her relationship with Liam Hemsworth, to which she replied "the whole album is a story of that and I think it says that starting with 'Adore You' and ending with 'Someone Else' ..... I think I knew more intuitively where my life was going than I actually thought I did at the time."[1] Elysa Gardner of USA Today thought of "Someone Else" as a more "reflective" lyrical offering from its parent record,[2] while Lipshutz interpreted the track to detail the departure of Cyrus' "past baggage" and the introduction of "her new self".[3] Dan DeLuca from The Philadelphia Inquirer assumed that the song was designed to address her transition from her innocent Hannah Montana image and then-recent breakup with fiance Liam Hemsworth; from a production standpoint, he jokingly referenced Cyrus' earlier single "We Can't Stop" when mentioning that "[Someone Else is] her party and she can do what she wants", in regards to the increasingly diverse genres she had begun experimenting with.[4] Los Angeles Times' Mikael Wood opined that it spoke of the "psychic damage" that comes with prosperity in the entertainment industry.[5] Based on the line "if you're looking for love know that love don't live here anymore" from the refrain,[6] David Drake and David Bry from Complex opined that Cyrus' track was "thematically" similar to "Love Don't Live Here Anymore" by Rose Royce.[7]

"Someone Else" was written by Cyrus, Mike Will Made It, MoZella, P-Nasty, Don Skipper III and Rock City; it was produced by Mike Will Made It, with co-production by P-Nasty, and engineered by Chris "Tek" O'Ryan. Stephen Hybicki recorded the song, which was later mixed by Jaycen Joshua assistance from Ryan Kaul.[8] Heather Phares from AllMusic noticed the frequent incorporation of "early-2010s trends" throughout Bangerz, and highlighted the electronic dance music (EDM) heard on "Someone Else" as an illustration of said production values.[9] Nick Catucci of Entertainment Weekly also identified the song as an EDM track,[10] while Billboard columnist Jason Lipshutz recognized further experimentation with synthpop musical styles.[3] The track is one of five songs where Cyrus raps on Bangerz.[10] 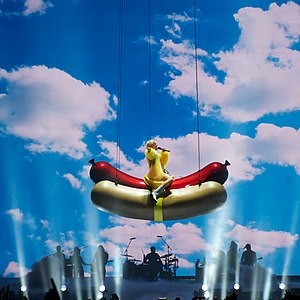 Cyrus performing "Someone Else" in Vancouver at the Rogers Arena on February 14, 2014

"Someone Else" received generally mixed reviews from contemporary music critics. On behalf of AllMusic, Heather Phares opined that Cyrus "sounds more mature than ever before" and successfully paired her vocals with current musical trends.[9] Katie Hasty from HitFix expressed a similar opinion, and suggested that Cyrus' vocal delivery was "big and convincing".[11] When discussing Cyrus' recently introduced rapping, Nick Catucci from Entertainment Weekly felt that the track saw Cyrus "[call] up her chops and [throw] into relief" in an unoriginal fashion "just how meek typical DJ bros like their hook girls."[10] The Los Angeles Times' Mikael Wood suggested that "Someone Else" was not as effective or "as arresting a statement" as Cyrus' cover version of "Look What They've Done To My Song" by Melanie Safka; he implied that "Someone Else" suffered from its "hollowed-out beat" and production values.[5] Sharing a similar sentiment, Evan Sawdey from PopMatters was disappointed by its "vanilla Euro club" sound, which he felt proved that Mike Will Made It offered more "misses" than "hits" for the record.[12]

On behalf of Digital Spy, Catriona Wightman suggested that Cyrus was "writing lyrics based on real-life experience" in a fashion similar to Taylor Swift; she assumed that the lyrics "cried" and "lied" acknowledged the reportedly turbulent relationship she experienced with Hemsworth. Wightman also felt that the line "I thought you'd catch me if I fall and fill me up when I'm empty" signified a lack of support from Hemsworth.[13] Writing for Thought Catalog, Cody Delistraty summarized the track as a presentation of "implicit versus explicit redundancy"; he highlighted the lines "'Cause that's what I've seen in movies, come to find out it’s not like that at all" and "you see real life's much different" for their perceived unnecessary repetition that failed to add "meaningful philosophies" to the recording.[14]

Cyrus has performed "Someone Else" during her headlining Bangerz Tour; it was among the final songs performed during the first showing in Vancouver on February 14, 2014. The track followed her performances of "23" by Mike Will Made It, in which she is featured artist, and her track "On My Own".[15] Dressed in an oversized fluffy yellow coat,[16] Cyrus sang the track while sitting mid-air on a hot dog.[15] Writing for Idolator, Mike Williott felt that the extravagant theatrics made a "very memorable" segment out of a "usually forgettable" song.[15] Nick Catucci from Entertainment Weekly praised the segment as the highlight of the concert, and further commented that Cyrus' delivery made the track a "token EDM" performance.[17]

Credits adapted from the liner notes of Bangerz.[8]

Retrieved from "https://en.everybodywiki.com/index.php?title=Someone_Else_(song)&oldid=1247012"
Categories:
Hidden categories:
This page was last edited on 15 January 2021, at 12:30.
This page has been accessed 159 times.
Content is available under License CC BY-SA 3.0 unless otherwise noted.
Privacy policy
About EverybodyWiki Bios & Wiki
Disclaimers
Dark mode