The Swiss sovereign money referendum of June 2018, also known as the sovereign money initiative,[note 2] [note 3] was a popular initiative in Switzerland intended to give the Swiss National Bank the sole authority to create money.[1]

Criticism of fractional-reserve banking has been prominent in such circles as the Austrian School for over a century. According to the initiative's supporters,[5] money is created as debt, and comes into existence by debt creation when commercial banks borrow from central banks, and when governments, producers, or consumers borrow from commercial banks. Proponents do not want money creation to be under private control as this constitutes a "subsidy" to the banking sector. They consider money created by the banks to create significantly adverse effects, such as inflation (since "the more money [the banks] issue, the higher their profits"), and amplification of crises (since borrowing occurs pro-cyclically). Furthermore, they claim that bank deposits are not inherently safe.[5]

In the wake of the Great Depression, economists from the University of Chicago circulated in March 1933 to about forty individuals a six-page memorandum with a proposal to "radically"[6] change the structure of the American financial system. They proposed, among other things, such as the abolition of the fractional reserve system and the imposition of 100% bank reserves on demand deposits. In 1939, Irving Fisher published “100% Money and the Public Debt,” a paper in which he supported the proposals of the memorandum.[7]

In 2011, U.S. Congressmen Dennis Kucinich introduced the National Emergency Employment Defense Act, a bill of legislation ”to restore the authority to create money to a Monetary Authority within the Department of the Treasury”.[10]

In 2015, following the 2008-11 crisis, Iceland's Prime Minister Sigmundur Davíð Gunnlaugsson commissioned a study for monetary and banking reform. Frosti Sigurjónsson, economist and MP, published his findings and recommendations the same year,[11] in which the abolition of fractional banking, among other things, was proposed.[12]

The proposal for the referendum was initiated in 2014 by the Monetary Modernisation Association, a Swiss non-governmental organization[5] founded in 2011. The collection of signatures began in June 2014 and resulted in over 110,000 valid signatures.[13] The initiative was submitted to the Federal Chancellery in December 2015.[14]

On 31 January 2018, the Swiss state scheduled the referendum for 10 June 2018, with two issues on the ballot, one about gambling, and another about money creation by banks.[2] The Sovereign Money Initiative aims to give the Swiss Confederation a monopoly on money creation, including demand deposit (full-reserve banking),[13] by including the creation of scriptural money in the legal mandate of the Swiss National Bank.[14] The Swiss National Bank opposed the referendum.[15] 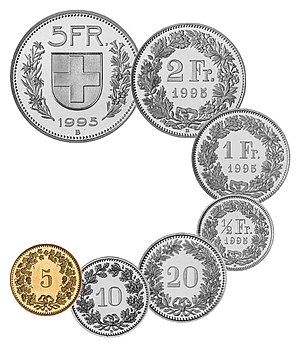 The coins of the Swiss franc.

The referendum does not concern the printing of banknotes or the minting of coins, as this remains under the exclusive authority of the Swiss National Bank, i.e. the nation's central bank, which has had this right since 1891.[13] The Federal Constitution states that "The Confederation [i.e. the Swiss state] is responsible for money and currency; the Confederation has the exclusive right to issue coins and banknotes" (article 99).[16] Thus, the creation of cash, today less than 10% of all the money in circulation,[13] remain under the control of the central bank.[17]

Reactions to the proposal[edit]

The Swiss National Bank chairman, Thomas Jordan, warned that "Acceptance of the initiative would plunge the Swiss economy into a period of extreme uncertainty" because "Switzerland would have an untested financial system that would differ fundamentally from that of any other country".[15][18] The Deutsche Bundesbank does not support the initiative.[19]

Such arguments are not new. Proposals for "full-reserve banking," going also by titles such as "debt-free money," have been repeatedly presented to the public and then attacked by both mainstream and heterodox economists who suggest that supporters of such "populist" schemes misunderstand central-bank operations, money creation, and how the banking system works. Abba Lerner, in 1943, had advocated that the central bank could start "printing money" to match government deficit-spending "sufficient to achieve and sustain full employment."[20][note 4]

Economist L. Randall Wray has argued repeatedly on what he sees as the "foolishness" of such notions.[21][22]

The Icelandic proposal, with exactly the same as the Swiss initiative, cited "the [private] banks' ability to create credit" as the reason that Iceland's banking system went overboard. Critics responded, this is not the case at all. The Central Bank of Iceland must provide banks with reserves[note 5] as needed so that the central bank does not lose control of interest rates and a liquidity crisis between banks is not triggered. The Central Bank of Iceland, critics of the proposal state, had to create and provide new central-bank reserves to accommodate banks as the banks expanded the money supply nineteenfold between 1994 and 2008.[23] As they point out, central banks do not and cannot control the money supply, contrary to what Monetarists claim. The money supply would still be endogenous under the Icelandic scheme unless the central bank of the country would be "willing to tolerate the interest rate going beyond its control" or for the economy to lack funds for borrowing.[23] Iceland's banks, they state, failed for other reasons, which were detailed in the special report[24] commissioned by the Icelandic parliament, they state, such as the rapid growth of the banks,[note 6] the deterioration of the quality of their portofolio, the fact that foreign deposits and short-term, securitized funding became the main source of funding for the three banks; and the prudential regulator was inexperienced and understaffed given the massive foreign exposure of the banking system.[23]

In June 2018, Financial Times columnist Martin Wolf urged his readers to vote in favor of the Swiss initiative, claiming that existing bank regulation and bank balance sheets would not be sufficient to prevent a major future crisis.[26]

On 10 June 2018, the Swiss rejected in a "landslide" of approximately 75% of negative votes the proposal of the sovereign-money project.[27][28]

Others articles of the Topics Politics AND Switzerland : Nicaragua–Switzerland relations

Others articles of the Topics Politics AND Business and economics : Export pessimism

Others articles of the Topic Business and economics : Timeline of Square, Currency, Hungry Hub, Timeline of Twitch.tv, Society for Human Resource Management, Bitcoin, Criticism of Walmart