The Pawnee capture of the Cheyenne Sacred Arrows

Likely, the Pawnee Indians lived in villages of earth lodges in the present-day state of Nebraska[1]:32 and northern Kansas[2]:5 already in the 16th century.[3]:121 At the time of the battle with the Cheyenne, the Skidi Pawnee populated the banks of Loup River in the central part of Nebraska. The Chawi, the Kitkahahki and the Pitahawirata made up the South Bands[2]:183, 195 and 199 as they lived south of the Platte.[2]:4 [1]:72Just some years later, they would move north and gather in the same area as the Skidi Pawnee.[4]:305 The Pawnee raised corn and other crops near their villages. However, they went on long communal bison hunts both summer and winter. While out on the plains, they lived in skin tents and tipis.[1]:71-84

The final groups of Cheyenne Indians seem to have crossed Missouri River from the eastern North Dakota in the last quarter of the 18th century. For a while, they lived south of Cannonball River near already established Cheyenne villages or camps.[5]:272 In the first decade of the 19th century, they mainly camped north of the North Platte.[6]:32 Around 1825, some bands headed south[6]:37 lured by reports about large herds of wild horses between Platte River and Arkansas River.[6]:33 This brought them close to the hunting grounds used by the Pawnee.[6]:48 [1]:204

The Pawnee and the Cheyenne had long been enemies, and had fought among themselves since the Cheyenne first moved into the area.[6]:47[7]:31 They captured horses[6]:101 and confronted each other on the plains, but neither side achieved any definite lasting advantage over the other.[8][9]:61-63[7]:31-2 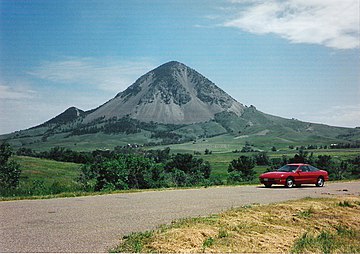 According to his traditional biography, the Cheyenne ancestral hero Sweet Medicine received the Sacred Arrows as a gift from supernatural beings, after being taken into a sacred cave at Bear Butte in the Black Hills.[9]:36[10]:268[11] The two Buffalo Arrows in the bundle were painted red and provided for good hunting.[10]:268[12]:543 The two Man Arrows were painted black painted and were instead for war′.[12]:543 When the four arrows were tied near the top of a lance in two separate pairs[12]:557 and carried against an enemy after the performance of the proper ceremony, they promised victory,[6]:50 and had already been present in the total destruction of a big Crow camp at Tongue River in 1820.[6]:24-26

The renewal of the arrows formed the most sacred of the Cheyenne ceremonies, and took place during summers and in response to unfortunate events, such as a homicide or other tragedy.[10]:268

A year before the battle, a party of Cheyenne warriors intended to raid the Pawnee near the lower Platte. The party was discovered and all killed. Just as the Cheyenne had done ten years before after the annihilation of 30 Cheyenne Bowstring warriors by the Crow. The tribe vowed to avenge the war group by moving the against those to blame for the killings.[6]:49

The summer of 1830, the entire Cheyenne tribe started down the Platte.[lower-alpha 1] A number of allied Lakota and Arapaho Indians joined. The special custodian or keeper of the Sacred Arrows, White Thunder, and his wife led them.[6]:49 The scouts sent out to locate the enemy found no traces of the Pawnee. By chance, the tribe came across four messengers from a party of scouts, all killed by the Pawnee.[12]:557 Now the Cheyenne tribe was even more determined to find their enemy. The scouts finally located a large camp of Pawnees at the head of the South Loup.[6]:49 (According to the Pawnee, they had camp somewhere on Platte River).[13]:644

After a forced day and night march, the body of people reached a place near the Pawnee camp in the early morning. The warriors prepared for battle. The women and children grouped in a circle where they had a view of the flat area soon to become a battlefield.[6]:49 [12]:558 The Pawnee camp seems to have been hidden on the other side of a ridge.

The Cheyenne warriors and their allies placed themselves in two separate wings. The Sacred Arrows should be in front of one wing. The other wing would follow a man wearing the sacred Buffalo Cap. "These two great medicines protected all who were behind them ... and rendered the enemy in front helpless".[6]:50

Meanwhile, the first bison hunters left the Pawnee camp and almost stumbled on the lined of the army. The battle was on, and White Thunder was unable to restrain the Cheyenne. Without having performed the required ceremony, he handed over the arrow bundle to a selected medicine man named Bull. Bull in turn hastily tied the whole bundle to the middle of his lance.[13]:646 Then he mounted his horse and tried to catch up with the rest of the warriors.[6]:57

"The battle was hard fought".[13]:647 An old Pawnee, apparently a Pitahawirata[12]:552 from the South Bands, was sick and tired of living. He had told his relatives to carry him to the very frontline of the battle.[13]:645 He was sitting on the ground with a bow and some arrows. Bull wanted to count coup on this enemy, although the rest of the Cheyennes tried to talk him from it.[12]:558 The old Pawnee avoided the thrust with the lance and seized it. He dragged it from Bull, who slowly rode back to his own line. "This spear must be a wonderful spear ...", shouted the Pawnee, or alternatively perhaps "Come here quickly and take this! Here is something wonderful!" when he saw the medicine bundle in a wrapping of coyote hide tied to it. The Pawnee rushed forward. Chief Big Eagle came first and secured the lance before the Cheyenne could recapture it.[13]:649[7]:37

During the fight, Chief Big Eagle wore the Wonderful Leggings of Pahukatawa. The leggings were a part of a tribal war bundle, and they seemed to make Big Eagle fearless. "Through the power of these leggings the Skiri [Skidi] captured the wonderful Cheyenne arrows".[14]:66 Further, Big Eagle was dressed in a red shirt and wore a government medal on his breast. Throughout the battle, he rode on a small spotted horse. Therefore, the Cheyenne remembered him as Spotted Horse or Big Spotted Horse.[13]:648 [12]:552

According to the Cheyenne, they killed the old Pawnee on the battlefield.[12]:558 The Pawnee say, he first died the next summer during a Cheyenne attack on an almost empty Pawnee village.[13]:651

With the Sacred Arrows gone and morale low, the Cheyenne failed to withstand a renewed charge by the Pawnee and retreated.[7]:37-8 "How many were killed on either side was not known".[12]:558 Lter, the Cheyenne retreated up the Platte, mourning the loss of the arrows, which George Bent described as "... the greatest disaster the Cheyennes ever suffered."[6]:51[6]:152

Pictures from two Lakota winter counts, 1843-1844. A Sacred Arrow of the Cheyennes was returned by the Lakota. The zigzag lines from or around the arrow designate it is a sacred object.

Pawnee Chief Big Eagle concluded they had captured something of extraordinary importance when he examined the arrows. He was keeper of the Morning Star bundle of the Skidi Pawnee and placed three of the arrows in that bundle.[13]:650 [14]:66 One Sacred Arrow was in the possession of the old Pawnee and his relatives. They had claimed the captured lance after the fight and received an arrow in addition.[13]:650

Some time after the battle, the best Cheyenne arrow makers made four surrogate Sacred Arrows.[6]:53[12]:558-560 However, they also tried in various ways to retrieve the originals. Once, they invited Big Eagle and the Pawnees to their camp. In return for the four arrows they promised the guests many horses. Big Eagle expected treachery and brought just one arrow wrapped in a bundle. As feared, a Cheyenne rode away with the arrow in an unguarded moment.[13]:657 Another source recounts that three Cheyenne, White Thunder, Old Bark, and Doll Man traveled to a Skidi village in 1835 where they were received in Big Eagle's lodge and given one Buffalo Arrow. Despite gifts of more than a hundred horses, no more arrows were returned.[7]:39

Two of the remade Sacred Arrows were now in excess. A ceremony was held, and the Cheyenne left two of the new arrows in a bundle in a crevice of the Black Hills, near the place where Sweet Medicine had received the original arrows. There they remained for a long while, and were occasional visited by Cheyenne travelers, before eventually disappearing.[6]:55[17]:224

Efforts to restore the additional two original arrows were again made in the 1890s and 1930s to no avail.[7]:40-1 The return of the remaining arrows remained a source of bitterness, and the two would not make peace until after they were eventually relocated to Indian reservations.[16]