Theologian of Christianity is defined as a specialist in theology or a person who is an expert on theology[1]and a scholar who studies systematically the truth of Christianity.[2] According to Martin Luther, truth is the Trinity God and His special revelation.[3] Therefore, a theologian is a person who interprets and studies God's Word and historically formed Christian doctrines. In relation to theology, German theologian Gerhard Ebeling sees Christianity as "the history of biblical interpretation".[4] Therefore, theologians have the task of systematically studying and interpreting tradition and current themes through biblical revelation. The theologian is not one who studies scholarship for himself, but one that promotes the public good of the church (public Ecclesiae bonum induxisset).[5]

St. Augustine, a representative theologian of Christianity and a bishop of the North African church, defined theology as a discourse on the word of God (de divinitate rationem sive sermone).[10] The theologian is the one who discusses God. The Roman Catholic theologian Thomas Aquinas defines theology as follows. He is taught by God, taught by God, and guided to God("Theologia a Deo docetur, Deum docet, et ad Deum ducit.”),[11] so we can discover theology from two scholars. Theologians are the first task of studying God. 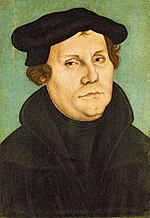 German theologian Martin Luther, the founder of the Reformed theology

The statue of Jean Calvin, the French theologian, the perfectionist of Protestant theology

In his COMMENTARY ON THE EPISTLE TO THE GALATIANS 2:14, Martin Luther says that anyone who can correctly distinguish between the law and the gospel has a reason to give thanks to God and that he is a true Christian theologian. Without this separation, Christian doctrine is impossible.[12] Professor Han said that Luther described the right distinction between law and the gospel as the best touchstone to distinguish true theologians, "the highest art of Christianity," and "summam totius Christianae doctrinae."[13] In Luther's 19th article in the Heidelberg thesis, he says, "A person who seeks to interpret God's invisible on the basis of all created things can not be called a theologian." In the thesis 20, "But those who are trying to understand the parts of the back of God, which mean the crucifixion and suffering, and the visible, are worthy of being called theologians.[14] (See the Theology of the Cross.) Luther considered the social practice of the Christian faith important.

John Calvin sees the theologian as a Bible interpreter. In his preface to the Christian Forcible, he reveals that his work is to better understand the Bible.[15] Calvin calls theologians not to imagine unbiblical things.[16] They are those who study the Bible correctly, the word of God's truth.[17]

Retrieved from "https://en.everybodywiki.com/index.php?title=Theologian_of_Christianity&oldid=971967"
Category:
Hidden categories:
This page was last edited on 19 August 2020, at 23:44.
This page has been accessed 430 times.
Content is available under License CC BY-SA 3.0 unless otherwise noted.
Privacy policy
About EverybodyWiki Bios & Wiki
Disclaimers