Jered Threatin (born 11 September 1989),[1] known professionally by the mononym Threatin, is an American musician, singer, songwriter, and multi-instrumentalist from Los Angeles, CA.[2] His first single, "Living is Dying" was released in June 2017[3] and was quickly followed by a second single entitled, "Identity", in July 2017.[4] His debut studio album, "Breaking the World", was released globally on 25 August 2017.[5][6] Threatin is known for his energetic live performances, diverse singing voice, and proficient musical abilities on multiple instruments.[7]

He began playing guitar at the age of 10, and piano, bass guitar, and drums at age 13.[7] Having never received formal music lessons his musical abilities were entirely self-taught.[7] He began performing on stage in clubs and music venues around the age of 14.[8] During this time he would attend school during the day and perform as a musician in the evenings. He graduated from college with a degree in psychology before finding fame.[8]

In 2012, he relocated from the mid-west to Los Angeles to further his musical career as a solo artist.[2] After arriving in California, he promptly began auditioning musicians to serve as his backing band.[9] Following the recruitment of these members to fill the band's touring line-up; he began performing across the United States.[2] During this time, Threatin quickly grew a large fan base and began to capture the attention of music industry professionals.[10][9] By late 2014, he signed a multiple album recording contract with the prominent record label Superlative Music Recordings.[11][12][13] From there, he began touring more extensively. This included a headlining North American tour that spanned the United States and Canada, and, another tour stint that spanned Europe and the United Kingdom.[14] After completing this extensive touring schedule he devoted the remainder of 2015 to songwriting and pre-production for his debut album.[9][8]

In early 2016, Threatin entered the studio to begin recording his highly anticipated debut album Breaking the World.[7] He performs all instruments and vocals on the album. It was recorded at Mindframe Studios in Los Angeles, California and mastered in New York City at Sterling Sound by Grammy nominated engineer Greg Calbi.[5][15] The album's lead single "Living is Dying" was released on 16 June 2017.[16] The song received national and international airplay on a number of major radio stations including KROQ, KLOS, and KCAL,[17] and was featured on the television station Music Choice.[10] On 7 August 2017, he released the official music video for the song "Living is Dying".[18][19] The second single from the album, "Identity" was released on 21 July 2017.[20][4] On 25 August 2017 "Breaking the World" was released globally by Superlative Music Recordings in North America and SPV GmbH in Europe and the United Kingdom.[5][21][22] Following the release of the album he won the Top Rock Artist of the Year award.[23] On 10 November 2017, he released his third single "If Need Be".[24] The song was accompanied by the release of an official lyric video on the same date.[25][26] 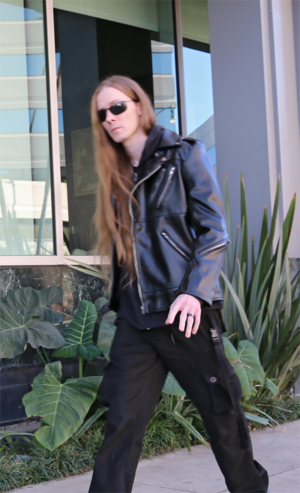 Threatin is known for his long hair, all black attire, and outspoken demeanor.[27] He regularly performs and appears publicly in all black clothing and has never been photographed wearing any color.[27] His attire typically consists of solid black twill pants, boots, T-shirt, and often a leather jacket or hooded garment.[28] He has been quoted as saying "there is no stage persona, what you see on stage is who I am all the time. If people think it's a character, then, I guess I'm a character all the time."[27]

Threatin's music has a diverse sound that has been compared to everything from The Beatles and Jimi Hendrix, to Metallica and Guns n' Roses.[27] Many of his songs have a hard rock sound while others have strong influences from outside the rock genre. Songs like "A Memory Forgotten" highlight his classical influences on the piano, while his substantial use of the acoustic guitar in songs like "If Need Be" and "All Your Pain" incorporate more of a 1960s singer-songwriter influence.[7]

This article "Threatin" is from Wikipedia. The list of its authors can be seen in its historical and/or the page Edithistory:Threatin. Articles copied from Draft Namespace on Wikipedia could be seen on the Draft Namespace of Wikipedia and not main one.