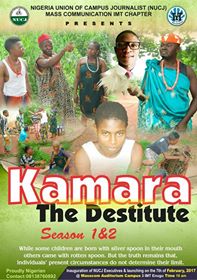 Vincent Ucheibe is a Nigerian movie maker, director TV host, content producer, creative writer and a journalist. He was borne on November 21, 1994. He hails from the beautiful city of Enugu state and precisely Oji-River LGA.

Early life: Vincent comes from a decent family of Ucheibe, a household where morality is held next to God. His mother Mrs. Roseline Ucheibe, a core catholic, taught him the best approach to the supreme being. She trains him and his siblings all the christian norms as per the catholic faith. His writing ability surfaced as early as at age two. He would scribble letters on the wall and books at random. He commenced full writing at his elementary school. His first editor is his mum, who would take out time to correct some errors as she would say,"you don't give feminine qualities to men neither do you give masculine to women. In that case stop saying my 'mummy is handsome', 'my dad is beautiful', "my dad is long".

Career: Vincent's career began during his junior secondary school level when one of his numerous fictional drama "wages of sin" was enacted on stage to mark the school annual send off party, under the auspices of his Economic teacher. After that it dawned on him that his works are useful. He wrote more including prose fictions. In 2011, as a secondary school leaver waiting for admission into tertiary institution, Vincent began the production of his first movie," greed and hostility" to the surprise of his colleagues. The movie sponsored by his family starred a Nollywood vetaran, Emeka Maranatha who doubled as the director, other acts include: Chris Iorbee, Blessing Azunagwa, Eddy Chukwudi, Ogo Nwachi, Success Unaegbu and Vincent Ucheibe playing the lead, a teenager who got ripped of his late dad's possessions by a wicked uncle enacted by Emeka Maranatha. The home movie circulated locally and caught the attention of dignities who saw it as a didactic piece that worth encouraging. It also garnered support from the then local parish priest of st. Mary's catholic church Achi, Rev. Father Bathlomew Aniebo. The cleric sold dozens of the copies during his Holy mass. Immidiately after that Master Vin as fondly called, got admission into the pretigeous Institute of Management and Technology (IMT) Enugu, to pursue his degree. In 2012, he was contracted by Odinacks, a theatre group, where he scripted, directed and starred in his epic script, 'Onyiriuka' , the home movie was also a huge success as people kept asking for more. In 2013, he began working on a script "Zoe's Return" with his campus team. The project is still on. In 2015, he began a fresh project "Njokwanuzo season 1&2" the directors cut was released on January 2016. After releasing a campus flick "campus wahala". In 2016, he completed a documentary "Akpauche" a vernacular programme set to air soon. in 2019 he a film village project in Achi.

Share
Retrieved from "https://en.everybodywiki.com/index.php?title=Vincent_Ucheibe&oldid=2129910"
Hidden categories:
This page was last edited on 31 October 2021, at 22:40.
Content is available under License CC BY-SA 3.0 unless otherwise noted.
This page has been accessed 738 times.
Privacy policy
About EverybodyWiki Bios & Wiki
Disclaimers