Ylenia Maria Sole Carrisi (born November 29, 1970 – missing since January 6, 1994) was the eldest daughter of Italian singers and actors Albano Carrisi and Romina Power. She disappeared under mysterious circumstances while visiting New Orleans, Louisiana in January 1994. Carrisi, upon her father's request, was declared presumed dead in December 2014.[1]

Carrisi was born in Rome on November 29, 1970, the eldest daughter of Albano Carrisi and Romina Power. Her maternal grandparents are American actor Tyrone Power and Mexican actress Linda Christian.

In 1983, she appeared with her parents in the film Champagne in paradiso. Later on, she was a letter-turner on the Italian version of Wheel of Fortune. She planned to become a novelist, and studied literature at King's College London, where she received the highest marks in her year. 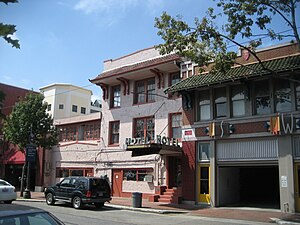 The LeDale Hotel on St. Charles Avenue, New Orleans, where Carrisi was staying at the time of her disappearance

During her studies, she began to entertain the idea of traveling the world solo with nothing but a backpack and her journal. She decided to take a break from studying and returned to Italy, where she sold all her belongings in order to pay for the voyage. She began in South America. After having spent a few months in Belize, she decided to leave the day after Christmas 1993 by bus to New Orleans, Louisiana. Her brother Yari, also an experienced traveler, had decided to surprise his sister by visiting her that Christmas. He arrived on a rainy December 27 in the village of Hopkins, going door-to-door searching for her, only to discover that the previous day she had boarded a bus to Mexico.

Carrisi was last seen in the French Quarter area of New Orleans, around January 6. Police efforts to find her did not yield any result. At the time of her disappearance, she was staying in the LeDale Hotel with Alexander Masakela, a street musician twenty years her senior. Masakela was arrested on January 31 on an unrelated charge[2] but eventually released for lack of evidence to connect him to Carrisi's disappearance.

In relation to her disappearance, a security guard testified that he saw a woman vaguely matching her description jump into the Mississippi River saying the words "I belong in water". A Coast Guard search turned up no sign of the young woman's body, which may have been washed out to sea. In any case, it has never been established that the person was Carrisi. In 1996, two years after her disappearance, an unidentified caller claimed that Carrisi was still alive but her whereabouts were unknown.[3]

Carrisi's parents last heard from their daughter on New Year's Eve 1993. They reported her missing on January 18, 1994.[4] Her mother believes that she is still alive. In November 2006, her father Albano stated for the first time that he believed the security guard's story, the Mississippi river jump — a theory that private investigator Frank Crescentini never believed. Crescentini has been voluntarily involved on Ylenia's case for over 20 years and is still seeking her today. In an interview, he stated "Ylenia Carrisi is just another missing case, and I will hunt the truth. If she's dead, well then show me her body and a DNA report." In January 2013, Albano filed a request for an official declaration of the death of his daughter. When asked about the declaration of the presumed death, Crescentini simply replied: "insane and shocking".

In June 2011 it was reported that Ylenia was living in a monastery in the United States. Her father dismissed the report as "shameful speculation containing not a bit of truth."[5]

Retrieved from "https://en.everybodywiki.com/index.php?title=Ylenia_Carrisi&oldid=1166190"
Categories:
Hidden categories:
This page was last edited on 15 December 2020, at 13:35.
This page has been accessed 66 times.
Content is available under License CC BY-SA 3.0 unless otherwise noted.
Privacy policy
About EverybodyWiki Bios & Wiki
Disclaimers