Djurovic lived in Sutomore where he finished elementary school and Gymnasium in Bar. He studied design at the Gymnasium Slobodan Škerović in Podgorica, in the class of professor Dragoljub Bato Brajović, a student of Milo Milunović. He was studied comics and illustrations. His role models were John Buscema, Burne Hogarth, William Vance, and Frank Frazetta.

He graduated from the Theological Faculty of the Serbian Orthodox Church in Belgrade in 1995. The formation of his theological ideas in this period was influenced by Dobrivoje Midić, a follower of John Zizioulas and "revolutionary" Greek theologians. He has served as a deacon since 1992 in the Monastery of the Presentation in Belgrade and in the St. John the Baptist Church in Mirijevo. He advocated frequent communion and “Return to the Fathers” at the theological faculty and in parishes.

He has held various solo exhibitions (Frescoes, Icons, and Paintings) and participated in numerous collective exhibitions in Serbia, Montenegro, and Italy. He has published various comic strips and illustrations in newspapers, magazines, and books. In 2001, he directed four TV transmissions about Christianity on Smederevo Television. The series was banned because of the method Djurovic used was considered too provocative. He was one of the protest leaders in Smederevo, which led to the fall of Slobodan Milošević.[1]

In 2002, Djurovic left Serbia and moved to Rome, where he studied at Institutum Patristicum Augustinianum of the Pontifical Lateran University. In January 2007, he acquired a license in theology and patristic sciences.

He received his Doctorate in Theology and Patristic Sciences in June 2010. He studied at Analisi esegetico-teologica, at IPA. He published his thesis the same year. 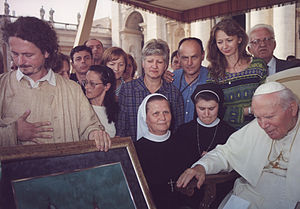 Djurovic's early years were characterized by the exploration of different painting and graphic techniques. His range of techniques is vast, so hyper-realistic egg tempera and rudimentary expression in oil paintings and frescoes can be seen, but his techniques tend toward the technology of materials, composition, expression, and psychology of person and figure.

Brutal execution was the main characteristic of most of his works until 2002. This expression persisted in the Roman period in certain pictures, especially in oils: landscapes, chtonic animals (cats, bulls, deer), and in one part of the portraits. The treatment in the iconography, on the contrary, has become more sophisticated, taking direction of Byzantine or Renaissance style.

Djurovic's art has been well accepted by members of the Roman Catholic Church. Some of his paintings adorn the rooms of Pope John Paul II, the Cardinals: Fiorenzo Angelini, Tarcisio Bertone, Gianfranco Ravasi, Tomas Špidlik.

He has painted several large icons for the Institutum Patristicum Augustinianum, including some for the office of the Dean, for the secretary's office, and for the Library. He is currently painting in the churches in Lazio and teaching at the Academy of Fine Arts and Conservation of the Serbian Orthodox Church in Belgrade (Аkademija Srpske Pravoslavne Crkve za umetnost i konzervaciju).

Translations from Greek in Serbian[edit]

Retrieved from "https://en.everybodywiki.com/index.php?title=Zoran_Djurovic&oldid=985262"
Category:
Hidden categories:
This page was last edited on 23 August 2020, at 10:43.
This page has been accessed 30 times.
Content is available under License CC BY-SA 3.0 unless otherwise noted.
Privacy policy
About EverybodyWiki Bios & Wiki
Disclaimers
Mobile view