Neptune and the Dwarf Planets 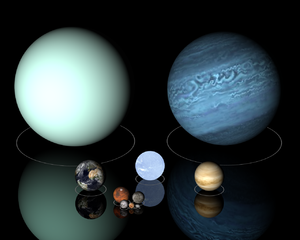 Comparison of Neptune with Uranus and the Earth

Neptune is the 8th planet from the Sun, while Planet Nine is still thought to be hypothetical. Pluto was for a long time considered the ninth planet but is now considered a dwarf planet.

Nearly 4.5 billion kilometers ( billion miles) from the Sun, Neptune orbits the Sun once every 165 years. It is invisible to the naked eye because of its extreme distance from Earth. The highly eccentric orbit of the dwarf planet Pluto brings Pluto inside Neptune's orbit for a 20-year period out of every 248 Earth years. The orbit of Planet Nine crosses the orbits of several other dwarf planets, which causes their orbits to be distorted. The dwarf planets orbit with several other minor planets in the Kuiper belt, similar to the asteroid belt but much farther away.

Pluto is not the only dwarf planet; there are others as well.

Retrieved from "https://en.everybodywiki.com/index.php?title=Neptune_and_the_Dwarf_Planets&oldid=1657403"
This page was last edited on 26 April 2021, at 09:16.
This page has been accessed 1,055 times.
Content is available under License CC BY-SA 3.0 unless otherwise noted.
Privacy policy
About EverybodyWiki Bios & Wiki
Disclaimers